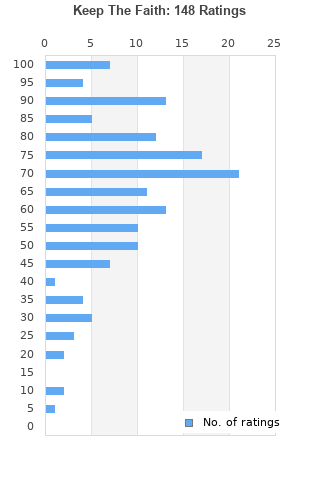 Bon Jovi Keep The Faith Album
Condition: Like New
Time left: 1h 53m 1s
Ships to: Worldwide
$9.99
Go to store
Product prices and availability are accurate as of the date indicated and are subject to change. Any price and availability information displayed on the linked website at the time of purchase will apply to the purchase of this product.  See full search results on eBay

Keep The Faith is ranked 3rd best out of 21 albums by Bon Jovi on BestEverAlbums.com.

The best album by Bon Jovi is Slippery When Wet which is ranked number 845 in the list of all-time albums with a total rank score of 2,215. 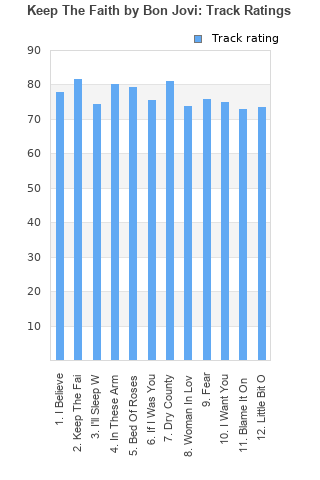 Rating metrics: Outliers can be removed when calculating a mean average to dampen the effects of ratings outside the normal distribution. This figure is provided as the trimmed mean. A high standard deviation can be legitimate, but can sometimes indicate 'gaming' is occurring. Consider a simplified example* of an item receiving ratings of 100, 50, & 0. The mean average rating would be 50. However, ratings of 55, 50 & 45 could also result in the same average. The second average might be more trusted because there is more consensus around a particular rating (a lower deviation).
(*In practice, some albums can have several thousand ratings)
This album has a Bayesian average rating of 65.8/100, a mean average of 65.2/100, and a trimmed mean (excluding outliers) of 65.2/100. The standard deviation for this album is 21.1.

Daydreamer claims if they had cut it to 8-9 tracks it would have been one of the best albums of the nineties? Ha ha! Not a f#&king chance!

Extremely underrated. Miles ahead of 80's Bon Jovi stuff with a more serious sound. Unfortunately it is very uneven with half of the songs being top notch rock songs and half bland filler. Had they cut it to 8-9 track album it would be one of the best records of the 90's.

A more mature Bon Jovi album. Some decent pop songs, in these arms, bed of roses, and the title track. The opening cut goes for a U2 sound, and, dry county, goes for the epic. Not bad album.

Bon Jovi's best album in my opinion the 1st 5 are all top no.s and the longest track I've known them to do in 'Dry County'also good not so sure on the rest 'Little Bit of Soul' maybe.

It seems that the whole point of this album was to prove that Bon Jovi was still relevant. It kinda worked. He managed to keep his band together and continue his career without fading into obscurity like the rest of his hair-metal peers (Motley Crue, Skid Row, Poison, etc...). It was a decent album, full of solid hooks. However, he boosted his sales by pandering to the rock-ballad crowd, making this by far Bon Jovi's wussiest record. The result is a uneven effort, with good tracks and bland tracks.

Another classic album turning 20 this year!
Time really flies.
After disbanding for 2 years Bon Jovi returned with such an amazing album that was a huge international hit indeed.
One of the things that I first loved back in 1992 was the new sound and songwriting. They reinvented themselves and they succeeded in it. In fact this album was more succesful than most of Grunge scene, coexisting in armony with big-seller bands like GNR, U2 or Def Leppard. (In 1993 Aerosmith had a big year too, in the height of Grunge movement)

'Keep The Faith' has two of the greatest Bon Jovi songs ever: 'Dry County', a near-10 min masterpiece, and 'Save a Prayer'. Yes, be shure to get a copy with 'Save a Prayer', otherwise the album isn't the same.

With this album, Bon Jovi proved they were legit and grunge wasn't going to push them into retirement. This is a focused rock record that combines the fun of arena rock with the seriousness of modern rock at the time. It also features some of Richie Sambora's best ever guitar playing. Little Bit of Soul is an underrated gem too.

Your feedback for Keep The Faith