Use Your Illusion I (studio album) by Guns N' Roses 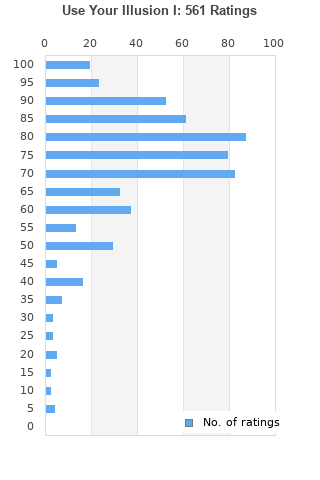 Use Your Illusion I is ranked 3rd best out of 9 albums by Guns N' Roses on BestEverAlbums.com.

The best album by Guns N' Roses is Appetite For Destruction which is ranked number 116 in the list of all-time albums with a total rank score of 13,552. 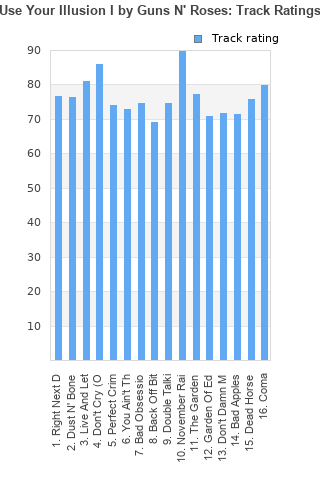 Use Your Illusion I rankings

Use Your Illusion I collection

Use Your Illusion I ratings

Rating metrics: Outliers can be removed when calculating a mean average to dampen the effects of ratings outside the normal distribution. This figure is provided as the trimmed mean. A high standard deviation can be legitimate, but can sometimes indicate 'gaming' is occurring. Consider a simplified example* of an item receiving ratings of 100, 50, & 0. The mean average rating would be 50. However, ratings of 55, 50 & 45 could also result in the same average. The second average might be more trusted because there is more consensus around a particular rating (a lower deviation).
(*In practice, some albums can have several thousand ratings)
This album has a Bayesian average rating of 73.0/100, a mean average of 72.0/100, and a trimmed mean (excluding outliers) of 73.0/100. The standard deviation for this album is 17.7.

Use Your Illusion I favourites

Use Your Illusion I comments

Yes it’s far too long, with too much filler but it contains some of the bands greatest tracks (Coma, November Rain, Don’t Cry (although I prefer the alternate version on UYI II)).

Big old bloated mess these 2 albums. Ego's out of control along with the drugs and losing a very important and key member who had the groove and replacing him with someone far inferior and losing that feel he brought. Rigid. Add piano and costume changes and any old clichéd shit you ever wrote. I guess there is just about enough material for 1 decent album that would resemble something like previous posts. Even that wouldn't be a be a brilliant record.

It’s an improvement compared with their previous stuff. The songwriting is a bit better; the songs are catchier. And there are some slower parts where slash’ talents shine through; the guy really carries this band and he is mediocre at best. Also, Slash’ guitar solos are much better than first. However, the guitar riffs are unimaginative as ever.
“November Rain” is cute, but you have to be really trying if that shit really brings tears to your eyes. Axl trying to make that silly voice he puts up sound emotional or deep is the most hilarious thing I have experienced today.

People always talk about the filler, but from what I can tell there are 10 good songs and 6 bad ones. The bad ones are really bad. But maybe we cannot agree which are the bad six. Here's my go as the single non-filler album (Ive cheated a little with 15 songs)

Like so many others have already pointed out, this album has some of the best songs GNR have ever done; however, there's way too much filler as well. For a band that was as talented as they were, that's just not good enough.

Albums as uneven as this one are the hardest to rate. I gave it a 80/100 rating and I'm being kind. There are maybe 5 really great songs and the rest is mostly filler. This is considered the lesser of the UYI albums for a good reason.

Both Illusion records get an 8/10 from me even though there is plenty of filler on both.Personally I believe they should of made a single record and kept the rest for b-sides and future records. My ideal Use Your Illusion album would be:

This would be one of the greatest records ever made. I also think this record would of sold over 30 million records just like Appetite has.

Long as hell but I had fun listening to the rockin tracks, some are fillers yeah but I find the standouts tend to stick in my mind the most

The, use your illusion, albums were released on the same day in September 1991, as the long awaited follow up's to the classic, appetite for destruction. There is some good stuff here, but there is some awful stuff too. Of the good stuff, there's, don't cry, the epic, coma, dust'n'bones, the stones-ish, you ain't the first, and, bad obsession. November rain, is good, but it's so overblown and bombastic, it's almost sickening, I mean, this is Guns'n'Roses, not journey. There's some terrible songs on here; don't damn me, back of bitch, garden of Eden, the garden, are all atrocious. Double talkin' jive, and, live and let die, are ok I suppose, as is, dead horse. None of these songs would have made it onto, appetite for destruction. The most disappointing of the two records.

Your feedback for Use Your Illusion I