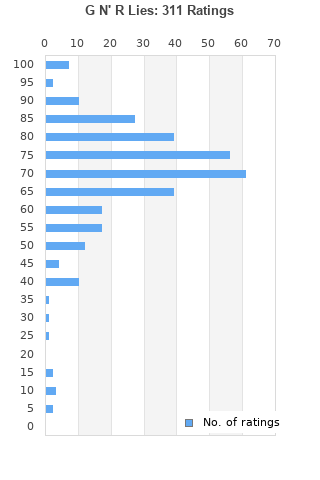 The best album by Guns N' Roses is Appetite For Destruction which is ranked number 116 in the list of all-time albums with a total rank score of 13,537. 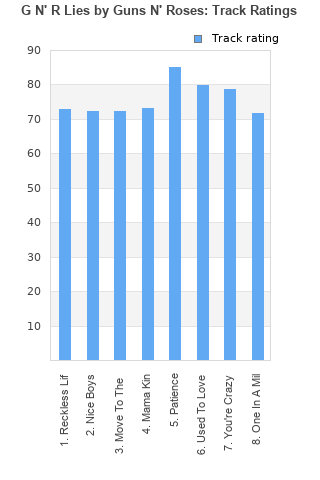 Rating metrics: Outliers can be removed when calculating a mean average to dampen the effects of ratings outside the normal distribution. This figure is provided as the trimmed mean. A high standard deviation can be legitimate, but can sometimes indicate 'gaming' is occurring. Consider a simplified example* of an item receiving ratings of 100, 50, & 0. The mean average rating would be 50. However, ratings of 55, 50 & 45 could also result in the same average. The second average might be more trusted because there is more consensus around a particular rating (a lower deviation).
(*In practice, some albums can have several thousand ratings)
This album has a Bayesian average rating of 70.6/100, a mean average of 69.0/100, and a trimmed mean (excluding outliers) of 70.5/100. The standard deviation for this album is 16.1.

Sure, its a bit of a "cash in" to get something out there after Appetite. But its not bad at all. There's barely a weak song, there's a certain amount of soul in the "live" side, and the four acoustic songs are burning with attitude. No filler. But then they over-compensated for that later with the Use Your Illusion Albums....

A stop gap release between, appetite for destruction, and the, use your illusion, albums. It consists of the, like a suicide, e.p, a four track live recording featuring a cover of Aerosmith's, mama kin, Rose Tattoo's, nice boys, and originals, reckless life, and, move to the city. The album also features four acoustic recordings, you're crazy,(original version on, appetite), used to love her, a darkly comic country number, one in a million, featuring some dubious observations from Axl Rose, and best of all, the beautiful ballad, patience. It's an enjoyable record featuring the dark and the light, the rock and the ballads, a decent stop gap.

I rank this one with Appetite as their best album. Yes, the lyrics are questionable on One in a Million, but it's a good tune and I can sympathize with a lot of what he's saying. Better than either Illusion album.

I too find this their most satisfying recording.

And unlike most folks I don't despite Axl for writing "One in a Million" one bit. On the contrary I applaud him for having had the guts to say it like he felt it during that period of his time.

Even today LA can be a mighty scary place for a penniless small town white boy to surface who just wants to sing rock music and who's got a chip the size of a mountain on his shoulder and who honestly doesn't yet know dick shit about the way world works.

In my book the long haired "loser" that Axl was, was as much of a society's outcast as gays, black men and immigrants were in the 80s USA. And for many today's Axls, gays, black people, drug addicts and immigrants and so on and so forth the world can still be one big fucking hell hole.

Being always politically correct only helps in cementing status quo. The only way the change is even possible is that somebody somewhere stands up and rocks the boat. What matters is how people around this rocker react to rocking.

A rushed-out sequel to Appetite for Destruction, it's not great but it doesn't deserve to be totally overlooked either. There's a good amount of quality here.

I must be the only one that likes this album more than any other by gnr. I don't think there is a remotely bad song here. I wish the first 4 didn't have the fake crowd noise because they are great songs but it kind of throws the listener off. And Crazy sounds way better the way they slowed it down on this album. And If you can get past the lyrics in One In A Million, its an amazing acoustic song, the way an acoustic guitar should sound.

This isn't bad. Is not as good as Appetite for Destruction or even Use Your Illusion, but it is not bad. Patience is a good track, and the other tracks are decent too. Good for G'N'R fans.

Although not even close to touching the genius of their debut, this album ain't bad at all. It has plenty of good rockers, even if it slips slightly pubescent on some of the lyrics.