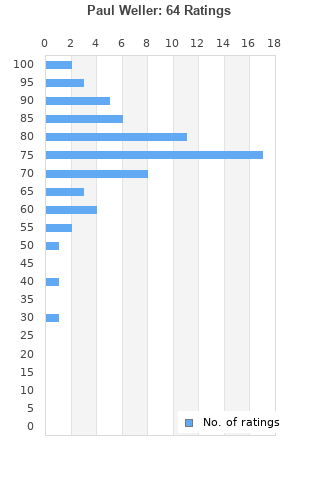 Paul Weller is ranked 4th best out of 25 albums by Paul Weller on BestEverAlbums.com.

The best album by Paul Weller is Stanley Road which is ranked number 1761 in the list of all-time albums with a total rank score of 976. 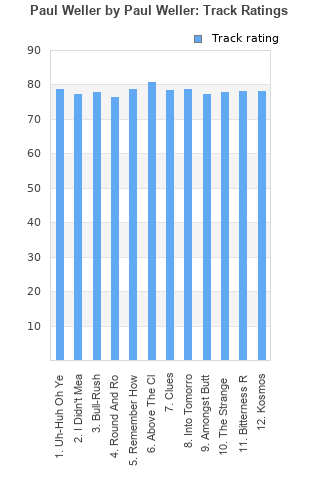 Rating metrics: Outliers can be removed when calculating a mean average to dampen the effects of ratings outside the normal distribution. This figure is provided as the trimmed mean. A high standard deviation can be legitimate, but can sometimes indicate 'gaming' is occurring. Consider a simplified example* of an item receiving ratings of 100, 50, & 0. The mean average rating would be 50. However, ratings of 55, 50 & 45 could also result in the same average. The second average might be more trusted because there is more consensus around a particular rating (a lower deviation).
(*In practice, some albums can have several thousand ratings)
This album is rated in the top 8% of all albums on BestEverAlbums.com. This album has a Bayesian average rating of 76.0/100, a mean average of 75.7/100, and a trimmed mean (excluding outliers) of 76.5/100. The standard deviation for this album is 13.3.

Been forced to reassess Weller as a solo artist based on my love of his last record. Never really got it before even though always loved the jam. This is enjoyable, straight up showing what he's about. Soul in all its flavours, a bit funk, the obvious 60s mod bands and a bit of what was on the go at the time in the name of acid jazz and a very slight dose of Manchester.

Decent first solo record, but not a patch on his work with The Jam. Still, it's not bad, just thought it might be better.

Although Wild Wood pretty much set the ball rolling for me in all my musical travels, and Stanley Road has some unquestionably classic songs on, this is the one that gets played most often... the songs are great throughout (not one skipped track!) It's more of a proper rock album than those others mentioned, and perhaps more in the spirit of The Jam.

Plenty of hooks and memorable moments.

Your feedback for Paul Weller