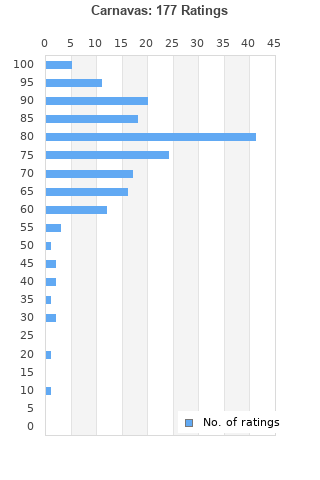 Carnavas is ranked as the best album by Silversun Pickups. 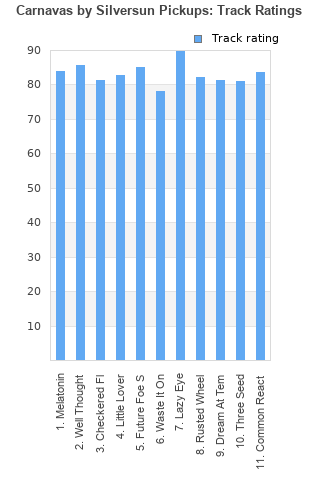 Rating metrics: Outliers can be removed when calculating a mean average to dampen the effects of ratings outside the normal distribution. This figure is provided as the trimmed mean. A high standard deviation can be legitimate, but can sometimes indicate 'gaming' is occurring. Consider a simplified example* of an item receiving ratings of 100, 50, & 0. The mean average rating would be 50. However, ratings of 55, 50 & 45 could also result in the same average. The second average might be more trusted because there is more consensus around a particular rating (a lower deviation).
(*In practice, some albums can have several thousand ratings)
This album is rated in the top 5% of all albums on BestEverAlbums.com. This album has a Bayesian average rating of 76.8/100, a mean average of 75.8/100, and a trimmed mean (excluding outliers) of 77.0/100. The standard deviation for this album is 14.7.

A little inconsistent in terms of songwriting quality and performance but the well conceived songs like Well Thought Out Twinkles, Little Lover's So Polite, Lazy Eye and Common Reactor are some of the best 2000s alt rock i have ever heards. Some really great guitar work on here too.

Excellent. I hear a lot of influence from the classic noisier and shoegaze bands of the 90s; Sonic Youth, Slowdive, Smashing Pumpkins.

Perhaps the perfect example of a one-album wonder (not counting Pikul), they could never quite expand their sound after Carnavas but as it's own entity it's still quite a marvel. No, it's not exactly original, yes the Smashing Pumpkins influence obviously but also plenty of Hum, My Bloody Valentine, Goo/Dirty-era Sonic Youth and the late 90s scratch-tastic electronic embellishments, but despite a couple tracks that veer close to larceny they manage to find their own sound thanks to a distinctive bass flare and some absolutely gorgeous vocal harmonies. It all does flow together really well, despite being distinctintively tuneful, though with Future Foe, Melantonin, Three Seed and ofc the seminal '07 radio staple "Lazy Eye" being the main standouts. Still sounds terrific, it wasn't a game-changing masterpiece but some decade-and-a-half later I can enjoy it nearly as much as I did when I first heard in my dum days, that's something special I take it.

Just sit back and fall asleep to this.

Carnavas is consistent, cohesive, and excellent throughout.

Reflective, Vulnerable, Emotive, Spacey. It's a great and underrated debut of a band unfairly compared to the Smashing Pumpkins

There isn't a bad song here it all fits together soundly.

A losing battle for many artists--if an album to consistent in it's tone and sound than it is too samey. I have heard this gripe for Carnavas and I disagree.

It brings you into it's world to escape for a bit. And music is good for 2 things. Escape or Socializing

Swoon to follow has better singles but is too similar to the debut to get the same score but its still solid.

Very underrated album. This band has a certain sound that they've absolutely mastered. There isn't a single bad track here.

It's pretty good, but I think I'd rather just get their greatest hits album.
Best tracks: Lazy Eye, Well Thought Out Twinkles, Melatonin
Worst track: Waste it On

Quick good abum, why so underrated?

Lazy Eye is an absolute cracker of a song too

Your feedback for Carnavas