One Nation Under A Groove (album) by Funkadelic 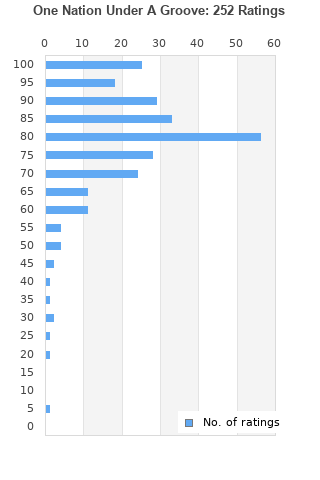 FUNKADELIC One Nation Under A Groove DELUXE NEW & SEALED 2X CD SET (CHARLY)
Condition: Brand New
Time left: 3h 3m 8s
Ships to: Worldwide
£29.99
Go to store
Product prices and availability are accurate as of the date indicated and are subject to change. Any price and availability information displayed on the linked website at the time of purchase will apply to the purchase of this product.  See full search results on eBay

One Nation Under A Groove is ranked 2nd best out of 14 albums by Funkadelic on BestEverAlbums.com.

The best album by Funkadelic is Maggot Brain which is ranked number 407 in the list of all-time albums with a total rank score of 4,700.

Listen to One Nation Under A Groove on YouTube 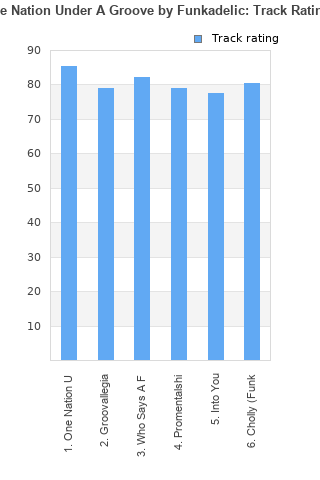 One Nation Under A Groove
Rating: 86 (47 votes)Comments:

One Nation Under A Groove rankings

One Nation Under A Groove collection

One Nation Under A Groove ratings

Rating metrics: Outliers can be removed when calculating a mean average to dampen the effects of ratings outside the normal distribution. This figure is provided as the trimmed mean. A high standard deviation can be legitimate, but can sometimes indicate 'gaming' is occurring. Consider a simplified example* of an item receiving ratings of 100, 50, & 0. The mean average rating would be 50. However, ratings of 55, 50 & 45 could also result in the same average. The second average might be more trusted because there is more consensus around a particular rating (a lower deviation).
(*In practice, some albums can have several thousand ratings)
This album is rated in the top 2% of albums on BestEverAlbums.com. This album has a mean average rating of 79.0/100. The trimmed mean (excluding outliers) is 80.5/100. The standard deviation for this album is 15.2.

One Nation Under A Groove favourites

One Nation Under A Groove comments

why does parliament , funkadelic, earth wind and fire, sly & the family stone are sou underrated in this site????????

A good album .. not a great album. The groove comes and goes and there exists a certain possibility that this record was mixed in the studio under altered states of minds. Go figure.

I totally agree, that song is in my top 50 of all time, great album.

Why is this not, at least, in our top 300? It's brilliant. Not one song without the words 'groovy' or 'funk' in it. And I love it. A feel good album that you van get into right away. Guitar playing is great, and some of the lyrics are my favourite ever. A must listen.

"One nation under a groove" is one of my all time favorite singles, probably in the top 20..This album remains one of the biggest selling R/B albums of all time. When it came out, Warners could not print enough to keep up with the demand. The same thing happened with the 1979 follow up, "Uncle Jam wants you" with the classic "Knee Deep".

Your feedback for One Nation Under A Groove