Songs From A Room (studio album) by Leonard Cohen 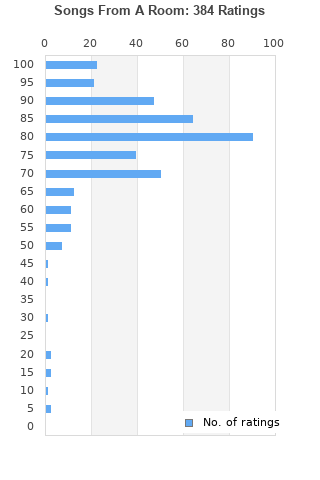 Songs From A Room is ranked 4th best out of 27 albums by Leonard Cohen on BestEverAlbums.com.

The best album by Leonard Cohen is Songs Of Leonard Cohen which is ranked number 154 in the list of all-time albums with a total rank score of 10,975. 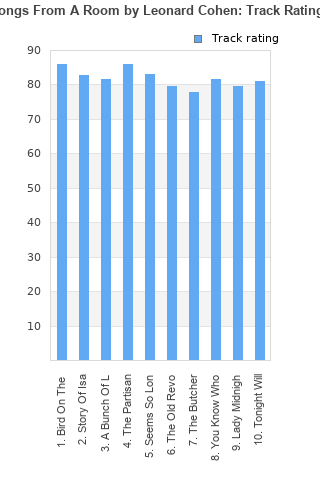 Songs From A Room rankings

Songs From A Room collection

Songs From A Room ratings

Rating metrics: Outliers can be removed when calculating a mean average to dampen the effects of ratings outside the normal distribution. This figure is provided as the trimmed mean. A high standard deviation can be legitimate, but can sometimes indicate 'gaming' is occurring. Consider a simplified example* of an item receiving ratings of 100, 50, & 0. The mean average rating would be 50. However, ratings of 55, 50 & 45 could also result in the same average. The second average might be more trusted because there is more consensus around a particular rating (a lower deviation).
(*In practice, some albums can have several thousand ratings)
This album is rated in the top 2% of all albums on BestEverAlbums.com. This album has a Bayesian average rating of 79.7/100, a mean average of 78.5/100, and a trimmed mean (excluding outliers) of 79.9/100. The standard deviation for this album is 14.7.

Songs From A Room favourites

Songs From A Room comments

There is some fantastic song writing on here but the record is let down by the musical side of it being quite weak and repetitive. Leonard Cohen is an absolute genius with his words and some of the lyrics we get on here are absolutely phenomenal. This is best evidenced on The Partisan and Bird On The Wire which are both like poetry to the ears. His vocal is solid throughout but it is a little plain in places and the delivery feels a bit empty. The big issue with this record for me is the sound and instrumentals that don't really go anywhere. Everything is quite simplistic and sounds the same the whole way through. This makes some of the weaker tracks quite a drag to get through and makes the record boring when you get deeper into it. Overall, the song writing is amazing but the music is simple and lacklustre which holds back the record quite a bit in my opinion.

Not as captivating as his first album, but still great listen.

Definitely not my favorite Cohen album, but it isn't a throwaway either. At times, it feels as if he is singing directly to you from close distance and it creates a very intimate feeling (sort of like being in a room with him...which makes me wonder about the album title). There is a definite overuse of the "Jew's Harp" in most songs and at times Cohen sings less as a poet and more as a somewhat novice performer. You'll find plenty of profound lyrics throughout the album, particularly in "A Bunch of Lonesome Heroes" and "You Know Who I Am." Recommended for those that are already fans but might be tough for those who are new to Cohen's work or were hit and miss on other releases.

Some people criticise Cohen for his apparently throwaway vocal style on this album, but for me it adds to the world-weary ambience, and his dark humour really shines - darkly.

Big fan. He just sounds so young and troubadourish here.

This is my favorite Leonard Cohen album. It is my favorite for many of the same reasons the self titled Townes Van Zandt album is my favorite Townes album or why Nebraska is the best Springsteen album, or Pink Moon is my fave Nick Drake, or or or etc. Its one of the most starkly grim albums I've ever heard. This album has shadows and pits of blackness so deep, when I listen to this record I am transported to some sort of bleak world with brief flashes of wonder and humanity. This album takes me on a surreal tour through the more shadow lands which exists right before me but is never seen or fully confronted, and my guide is a grizzled wiseman who has seen it clear and has charted and documented all its byroads and ramifications.

I don't know how to talk about this album without getting lost in some ethereal goo. Leonard Cohen was such an accomplished writer and artist by this point. A relatively "old" and very wise 35, already a published and respected Poet. He had more questions and insights than maybe any songwriter at the time of this album. Yet, this album isn't just some scholarly exercise. There is such a depth of feeling in this album which is unleashed in waves of pain and awe due, i think, to the fact that the words are so carefully chosen and so spot on that it strikes a very deep and up that point sleeping nerve.

The opener "Bird On The Wire" is truly one of the very few sacred moments in music history for me. The hugeness of its simple verses, the sheer pain of it, the emotion which that song wells up for me, is something I can't fathom. The sorrow, the need for forgiveness, the brittle vocal delivery, everything....oh man.

The album from that stunning opener, continues to hit you with bleak, austere portraits of friends lost to suicide (Seems So Long Ago, Nancy), of biblical visions of the darkest side of human beings (Story of Isaac), of the immutable devotion to freedom and the endless struggle to overcome evil no matter how futile and no matter what the cost (The Partisan), andof the mysteries of long nights of transient liberty and romance (Lady Midnight), etc.

Musically, there are eccentric touches. The sound backing Cohen on "The Old revolution" (i've no idea what that is, but its cool), the dirgey, low end chug of the acoustic guitar in "The Butcher", hell there is a similar strange effect on "A Bunch of Lonesome Heroes" and "Lady Midnight as on "The Old Revolution"(can someone smarter than me explain to me what that rattly effect is? I am ignorant, but I like it.) also that sweet, far-off electric guitar is freaking awesome, the women speaking french in the most angellic and doomed way on "The Partison,
the organ in "Lady Midnight", etc. There are a lot of little moments on here which push this album, somehow, to new heights.

And finally the closer "Tonight Will Be Fine" is such a great closer. Its by far the least bleak moment on the album, Cohen humsa sweet childish tune, he makes funny rhymes, he talks sex, he whistles, and the bass line is a playful bounce. If I am thinking of this album as a tour through the darkness, then this is the moment toward the end of the tour when the wise man, seeing you are really shook up takes pity, gives a soft smile, shakes you out of your glossy-eyed horror and looks you straight in the eyes and says in his deep, baritone voice "It's okay, there is much beauty and there is some hope and there are reasons to love and to live and to care. It will be fine for awhile.".

The follow up to his debut album, Leonard Cohen releases another superb LP featuring more stunning songs. Bird on the wire, is of course a classic, but every song is excellent, from, the butcher, to, lady midnight, it's all superb. Cohen was at the top of his game here, both musically and vocally. An essential record for anyone who loves great songwriting.

Your feedback for Songs From A Room