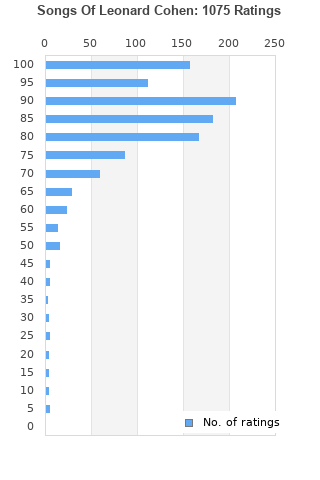 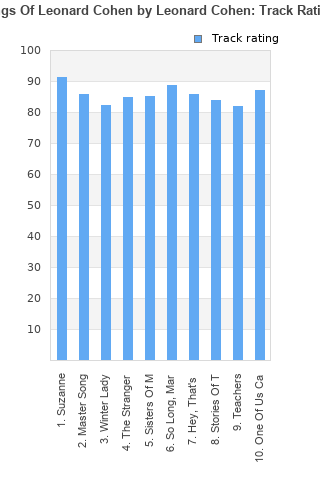 Rating metrics: Outliers can be removed when calculating a mean average to dampen the effects of ratings outside the normal distribution. This figure is provided as the trimmed mean. A high standard deviation can be legitimate, but can sometimes indicate 'gaming' is occurring. Consider a simplified example* of an item receiving ratings of 100, 50, & 0. The mean average rating would be 50. However, ratings of 55, 50 & 45 could also result in the same average. The second average might be more trusted because there is more consensus around a particular rating (a lower deviation).
(*In practice, some albums can have several thousand ratings)
This album is rated in the top 1% of all albums on BestEverAlbums.com. This album has a Bayesian average rating of 84.5/100, a mean average of 83.3/100, and a trimmed mean (excluding outliers) of 84.6/100. The standard deviation for this album is 15.0.

It's nice to see this album moving up the charts! I think Cohen's best will come later, but he deserves the respect for being one of the most clever songwriters of a generation.

A really good album. Mostly acoustic but with some lovely touches added to lift the songs. Strongest section is Sisters of Mercy - So Long, Marianne - Het, That's No Way to Say Goodbye. Suzanne also good. I have Bonus tracks of which Store Room is a bit repetitive but the fuller instrumentation including drums on Blessed Is The Memory is super but can see why it was left off the original album which is more sparse.

Remarkably strong collection of songs for a debut album.

Suzanne is the standout track from this album but the lyrics are astonishing and beautiful very iconic voice.

Probably my favorite from Cohen. The lyrics are always great but sometimes the music is subpar, but not here. The arrangements and production are good on this album too

Your feedback for Songs Of Leonard Cohen