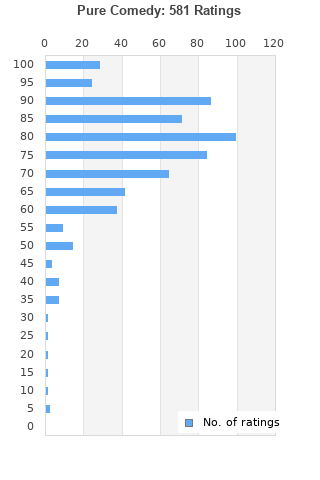 Pure Comedy is ranked 2nd best out of 6 albums by Father John Misty on BestEverAlbums.com.

The best album by Father John Misty is I Love You, Honeybear which is ranked number 278 in the list of all-time albums with a total rank score of 6,812. 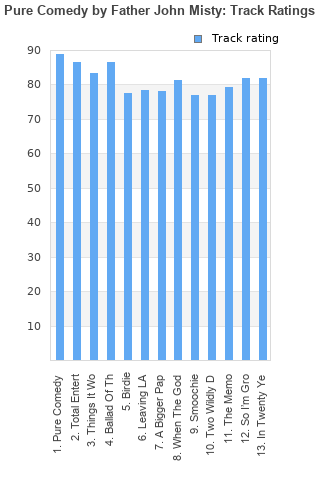 1
3.
Things It Would Have Been Helpful To Know Before The Revolution
Rating: 84 (115 votes)Comments:

Rating metrics: Outliers can be removed when calculating a mean average to dampen the effects of ratings outside the normal distribution. This figure is provided as the trimmed mean. A high standard deviation can be legitimate, but can sometimes indicate 'gaming' is occurring. Consider a simplified example* of an item receiving ratings of 100, 50, & 0. The mean average rating would be 50. However, ratings of 55, 50 & 45 could also result in the same average. The second average might be more trusted because there is more consensus around a particular rating (a lower deviation).
(*In practice, some albums can have several thousand ratings)
This album is rated in the top 4% of all albums on BestEverAlbums.com. This album has a Bayesian average rating of 77.1/100, a mean average of 76.4/100, and a trimmed mean (excluding outliers) of 77.2/100. The standard deviation for this album is 15.0.

very underrated by so many people. personally I loved it.

I don't want to be mean, but if you call the writing on this album bad you might need your head checked. Political commentary hasn't been this good since TPAB.

It's funny, cutting, self-aware, and postmodern. What more could you want from FJM?

Pretentious seems like a based criticism, but he's always self-aware, negating that argument.

Smoochie and Two Wildly Different Perspectives don't belong here, but the rest is a high water mark in 2010's folk ambition and execution.

This'll be a stone-cold classic in about 15 years.

This has to be the most depressing album I ever heard. I was just miserable listening to this album and wanted to cry. Yet, I love this album.

When a 70+ minute album doesn't get you bored/tired/anxious, it means the artist did a great job. Congrats, Padre Juan Brumoso. 8/10.

I'm a big fan of Father John Misty and I Love You, Honeybear is one of my favourite albums from the 2010s. The issue with this album is its inconsistency: the title track is great, as is Total Entertainment Forever (along with a few others), but there are so many songs which are uninteresting and boring to me. I'm really interested to hear what FJM has to say next though, he is a very talented musician.

I came back to this album recently after initially being incredibly turned off by the last three-quarters of it. The first four tracks are all great, prime FJM. But god do I hate Birdie and Leaving LA. I think it's the combination of the soft, drawn-out feel of the songs and FJM's always-wailing vocal delivery that really grinds me. However, the tracks after that are all alright. The lyrics are pretty good (insightful and pretentious), and the music is pleasant enough.

Came for the melodies, stayed for the surprisingly self-aware social commentary. 9/10

Your feedback for Pure Comedy