The latest album released by Father John Misty is Off-Key In Hamburg. This album was released 03/23/2020.

The best album credited to Father John Misty is I Love You, Honeybear which is ranked number 270 in the overall greatest album chart with a total rank score of 7,312.

Father John Misty is ranked number 180 in the overall artist rankings with a total rank score of 12,736.

Father John Misty : I Love You, Honeybear CD (2015)
Condition: Very Good
Time left: 5h 19m 4s
Ships to: Worldwide
$19.20
Go to store
Product prices and availability are accurate as of the date indicated and are subject to change. Any price and availability information displayed on the linked website at the time of purchase will apply to the purchase of this product.  See full search results on eBay

The following albums by Father John Misty are ranked highest in the greatest album charts:

1.
I Love You, Honeybear

This may not be a complete discography for Father John Misty.This listing only shows those albums by this artist that appear in at least one chart on this site. If an album is 'missing' that you think deserves to be here, you can include it in your own chart from the My Charts page!

2
(from the album I Love You, Honeybear)
14.
Things It Would Have Been Helpful To Know Before The Revolution
Rating: 84 (107 votes)Comments: 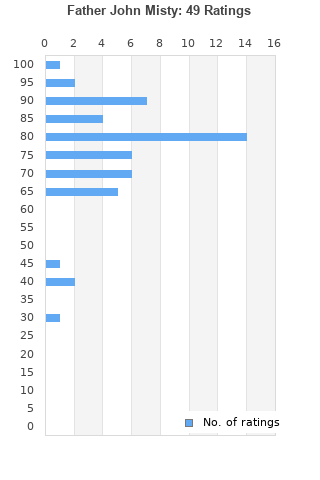 Rating metrics: Outliers can be removed when calculating a mean average to dampen the effects of ratings outside the normal distribution. This figure is provided as the trimmed mean. A high standard deviation can be legitimate, but can sometimes indicate 'gaming' is occurring. Consider a simplified example* of an item receiving ratings of 100, 50, & 0. The mean average rating would be 50. However, ratings of 55, 50 & 45 could also result in the same average. The second average might be more trusted because there is more consensus around a particular rating (a lower deviation).
(*In practice, some artists can have several thousand ratings)
This artist is rated in the top 19% of all artists on BestEverAlbums.com. This artist has a mean average rating of 75.0/100. The trimmed mean (excluding outliers) is 76.7/100. The standard deviation for this artist is 16.5.

I only started listening to FJM last year, have been sleeping on him for quite a while because I thought he was just another indie folk guy. Couldn't have been more wrong. A binge through his discography is a must for anyone who loves music.

This guy's reinterpretation of Taylor Swift's Blank Space while impersonating Lou Reed is GENIUS, in a weird, hilarious kind of way.

He's got a decent album under his belt as well as what is my favorite album of the year as of 9/21/15. He says that his next album is already written, so I hope that he makes sure that it will be compositionally intricate as well. Take your time and don't Sun kil Moon us.

Your feedback for Father John Misty