Asunder, Sweet And Other Distress (studio album) by Godspeed You! Black Emperor 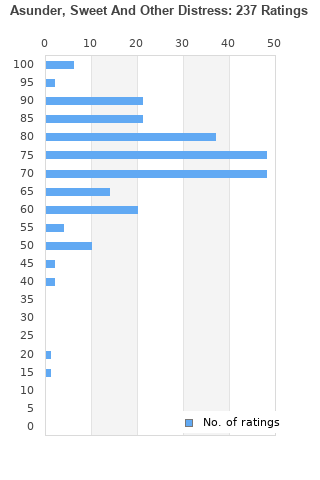 Godspeed You! Black Emperor ‎– Asunder, Sweet And Other Distress SEALED VINYL LP
Condition: New
Time left: 3d 4h 44s
Ships to: Worldwide
$21.39
Go to store
Product prices and availability are accurate as of the date indicated and are subject to change. Any price and availability information displayed on the linked website at the time of purchase will apply to the purchase of this product.  See full search results on eBay

Asunder, Sweet And Other Distress is ranked 6th best out of 9 albums by Godspeed You! Black Emperor on BestEverAlbums.com.

The best album by Godspeed You! Black Emperor is Lift Yr. Skinny Fists Like Antennas To Heaven which is ranked number 85 in the list of all-time albums with a total rank score of 17,964.

Listen to Asunder, Sweet And Other Distress on YouTube 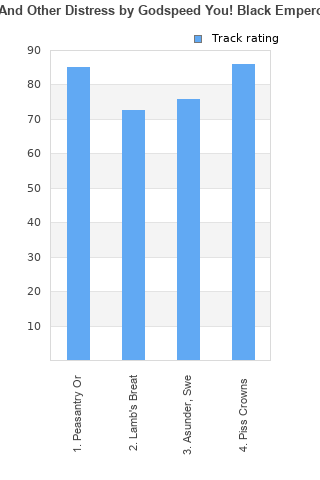 Asunder, Sweet And Other Distress rankings

Asunder, Sweet And Other Distress collection

Asunder, Sweet And Other Distress ratings

Rating metrics: Outliers can be removed when calculating a mean average to dampen the effects of ratings outside the normal distribution. This figure is provided as the trimmed mean. A high standard deviation can be legitimate, but can sometimes indicate 'gaming' is occurring. Consider a simplified example* of an item receiving ratings of 100, 50, & 0. The mean average rating would be 50. However, ratings of 55, 50 & 45 could also result in the same average. The second average might be more trusted because there is more consensus around a particular rating (a lower deviation).
(*In practice, some albums can have several thousand ratings)
This album has a Bayesian average rating of 73.8/100, a mean average of 73.3/100, and a trimmed mean (excluding outliers) of 73.8/100. The standard deviation for this album is 12.6.

Asunder, Sweet And Other Distress favourites

Asunder, Sweet And Other Distress comments

Piss Crowns Are Trebled is the best song title I've seen and am likely to see. It's a kickass song too.

I agree that it's not their best album, but i'm rather tired of all the crying over the drones in the middle. I mean, some of their great tracks from their earliest works, (Static, Antennas to Heaven, Providence...) have very long drones as well.

The middle two tracks!
Sounds like listening to iDoser!
The other two tracks are good though, it's just bad production

Pretty cool starting track to the record and an excellent ending track. The middle 2 tracks though are just constant incessant noise that doesn't end soon enough

Contender for BEST RECORD of 2015.

Definitely their hardest most aggressive album, which can be nice depending on my mood, but the middle drags on a little longer than I would have hoped. It also feels like their least inventive.

If we just pay attention to the musical side, it's magnificient and grandiloquient, GY!BE never were so heavy and melodic, I saw them live two weeks ago and it was the best concert of my life. If I have to judge his aesthetics, I have to admit it's not THAT precious, because it lacks the conceptual strenght of the old GY!BE, so the drones part in the middle is just a bridge that makes the last melodic explosion stronger, but it's quite boring and has no ideological power as it was in the previous works

I don't know, I feel rather displeased by this new GYBE album. The four pieces of this short outfit have been around for a while in their live material, and I'm pretty sure this feels a lot more powerful on stage than in studio, but it's like if they weren't trying to experiment on this one. You know, the sound is rawer, angrier and all of that (probably their more aggressive one), but it's like if they were trying to dig always in the same hole. 'Allelujah introduced some new melodies and sensibilities in their music, but not this one. They could add up so much more (like use of electronics, acoustic guitars, experimental sounds, more contrapunctual melodies, like in the very end of the last song of this LP, instead of just every instrument doing the same thing to make music sound louder, nearly orchestral stuff, etc.) but instead they end up doing always quiet parts, crescendos, accumulation of tension, loud explosion and release of tension, diminuendos and quiet parts again, like in a loop. In the end, it's a good album, a decent one, worth-hearing, but it feels like something you've already heard, nothing innovative nor so impressive.

Your feedback for Asunder, Sweet And Other Distress