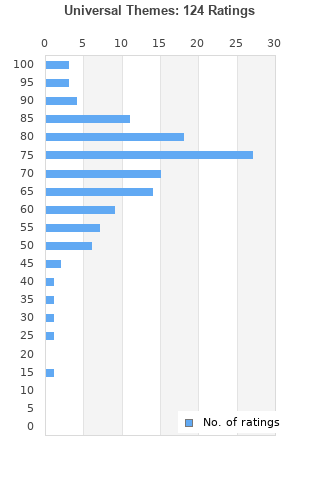 SUN KIL MOON - Universal Themes - CD - **BRAND NEW/STILL SEALED**
Condition: Brand New
Time left: 3d 21h 44m 7s
Ships to: Worldwide
$49.49
Go to store
Product prices and availability are accurate as of the date indicated and are subject to change. Any price and availability information displayed on the linked website at the time of purchase will apply to the purchase of this product.  See full search results on eBay

Universal Themes is ranked 4th best out of 12 albums by Sun Kil Moon on BestEverAlbums.com.

The best album by Sun Kil Moon is Benji which is ranked number 347 in the list of all-time albums with a total rank score of 5,679. 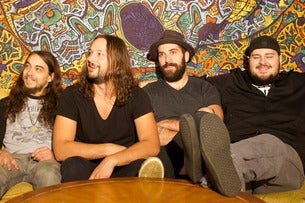 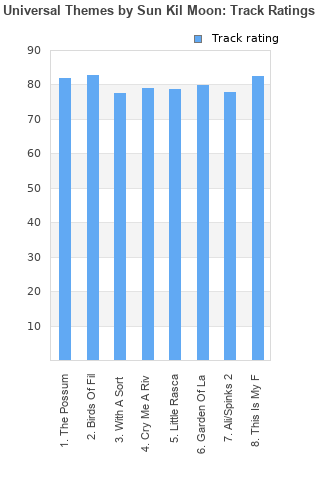 Rating metrics: Outliers can be removed when calculating a mean average to dampen the effects of ratings outside the normal distribution. This figure is provided as the trimmed mean. A high standard deviation can be legitimate, but can sometimes indicate 'gaming' is occurring. Consider a simplified example* of an item receiving ratings of 100, 50, & 0. The mean average rating would be 50. However, ratings of 55, 50 & 45 could also result in the same average. The second average might be more trusted because there is more consensus around a particular rating (a lower deviation).
(*In practice, some albums can have several thousand ratings)
This album has a Bayesian average rating of 71.0/100, a mean average of 70.5/100, and a trimmed mean (excluding outliers) of 70.8/100. The standard deviation for this album is 13.8.

@Juneof44
I totally agree with you

Pretty tough to get into an album where the guy is not even singing and just rambling on and on about randomness. I don't get the appeal for Sun Kil Moon

There is a very fine line between valuing life through the power of its simple and casual crudeness and randomly inferring grandiose meanings in banality. The whole lyrical and musical concept is really the same as before, the difference is in well-doing. “Benji” was a masterpiece because it accomplished it; “Universal Themes” stops short of it, which makes it pretentious bullshit.

(And, about the title polemics, my opinion is that, although every story is super-specific, they all (intend to) represent these grandiose themes that all of us are always wondering about, like mortality, etc.)

Nylon guitars and spoken word. I'm sick of it, i miss the first records until "April".

It's just great to watch and listen to such an interesting artist stretch himself in so many different directions from one album to the next. I have my doubts this works, though.

I prefer this to Benji. Much more musically diverse...especially love the strings on "Birds of Films."

Please ignore my previous comment. The album's a bit more difficult and ungainly than Benji, with M Kozelek thrown us more of a bone this time. The music being more ornate, Kozelek relates various tales from his life, some interesting some mundane that are no less affecting or touching.

I disagree. I think each song strings together very specific moments, because they all teach a very specific lesson, or have a running idea. I think the clearest idea of this is the closing track, which is all about being somewhere you said you'd be, but then feeling out of place, and learning to be okay with it, in spite of one's comfort. "Birds of Flims" is very similar in that way, and I think it works really well across the board. In fact, look at the album art. You probably don't know where that is, but you know what it is. You have this idea of familiarity, even if it's outside of something you've seen, or somewhere you've been. Slowly, pieces come together, and it actually is very unified. It takes a bit to get there, but I promise that it makes sense. And you could say, "HoldenM, you idiot, you're reading too much into this," to which I say, no I'm not. At first glance, none of it makes much sense, but seen from a distance, it really is like nothing else.

The joke being that there aren't any universal themes, instead this is super-Mark Kozelek specific. A lot more awkward and ungainly than Benji, Kozelek basically rambles various tales from his life, some interesting some mundane over eight 10 minutes slabs of indie-folk. With few melodic hooklines to anchor the songs and the troubling fact that it will be very hard to develop any kind of emotional resonance over what Kozelek and his girlfriend watched on HBO, it's very hard to view Universal Themes as little else than two fingers to his casual fans.

Listening to for the first time right now, and so far this is how I feel.

If you got into Mark's music when Benji came out last year, don't expect the same album. The songs here are much more diverse lyrically and instrumentally, and the track "With A Sort Of Grace I Walked To The Bathroom To Cry" was seriously confusing my first listen. "Little Rascals" is shockingly aggressive as well.

Your feedback for Universal Themes