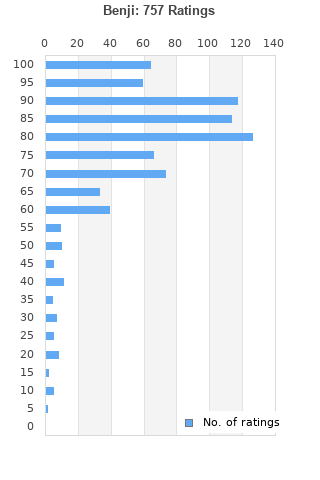 Benji is ranked as the best album by Sun Kil Moon. 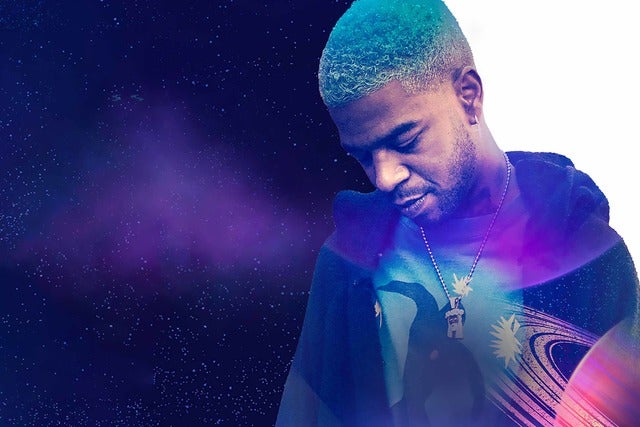 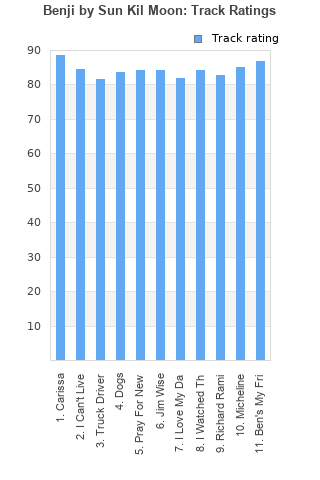 Rating metrics: Outliers can be removed when calculating a mean average to dampen the effects of ratings outside the normal distribution. This figure is provided as the trimmed mean. A high standard deviation can be legitimate, but can sometimes indicate 'gaming' is occurring. Consider a simplified example* of an item receiving ratings of 100, 50, & 0. The mean average rating would be 50. However, ratings of 55, 50 & 45 could also result in the same average. The second average might be more trusted because there is more consensus around a particular rating (a lower deviation).
(*In practice, some albums can have several thousand ratings)
This album is rated in the top 2% of all albums on BestEverAlbums.com. This album has a Bayesian average rating of 79.9/100, a mean average of 78.2/100, and a trimmed mean (excluding outliers) of 80.0/100. The standard deviation for this album is 17.4.

There was a time, perhaps not that long ago, where I would have dismissed this album as boring and unlistenable. As a middle aged man…yeah, this record resonates. It’s not necessarily the music or the lyrics or the voice that resonates, but the wisdom that comes from an accumulation of loss, hurt, regret, and guilt.

“Ben Is My Friend” is maybe the one track that didn’t click for me.

This album is full of emotional and well written songs that really grip you and keep you entertained. While it does drag for the hour run time there is still enough to explore to make it a great record. The instrumentation is brilliant and minimalistic and the guitar work really suits the atmosphere and flow of the record. There are the weaker tracks lyrically as well which are a bit more simple but they still provide entertainment and there is a lot still to find in those tracks. The music is so honest and accessible that it is difficult to see why you wouldn't enjoy this album as it can be enjoyed both passively or you could deeply listen to the record and it would provide just as much pleasure either way. On the whole, this is a fantastic record and one that I love to revisit.

A chilling folk album about death reminiscent of Nebraska

I've always felt a tension between my appreciation of the art and my appreciation of the artist, and no artist's work epitomizes that polarity more than Mark Kozelek. One the one hand, there's this album, which is by turns funny, morbid, obfuscatory, and achingly beautiful--a somber rock performance worthy of the critical accolades it received at the time. On the other hand is Mark Kozelek himself, the kind of misogynistic jerk who onstage called a female journalist who wanted to interview him a "bitch." I think I'm pretty much done with him, but I can't quite bring myself to ignore the high quality of this album or its deserving place among the best albums of 2014.

Can't believe I haven't heard this until now. This is a fantastic record

Mark Kozelek is my favorite artist of the last years. It is unstoppable: he releases more and more albums and is doing more and more touring. The American is the author of "Benji" (with Sun Kil Moon): an absolute masterpiece. The songs are pure, the album is largely built around his voice and his guitar. The stories told in this album are exciting and very well written. Indeed, I think it's one of the best album of all time in terms of writing. "Benji" is, for me, the biggest album of Mark Kozelek's discography.

Your feedback for Benji