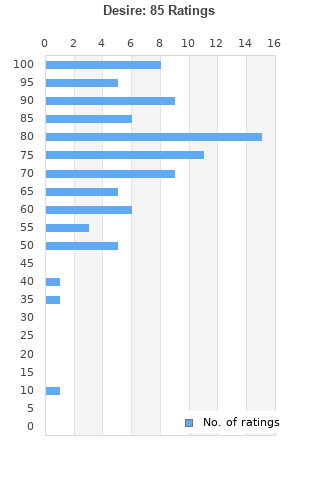 Tuxedomoon - Desire [New CD]
Condition: Brand New
Time left: 12h 38m 6s
Ships to: Worldwide
$15.48
Go to store
Product prices and availability are accurate as of the date indicated and are subject to change. Any price and availability information displayed on the linked website at the time of purchase will apply to the purchase of this product.  See full search results on eBay

Desire is ranked as the best album by Tuxedomoon. 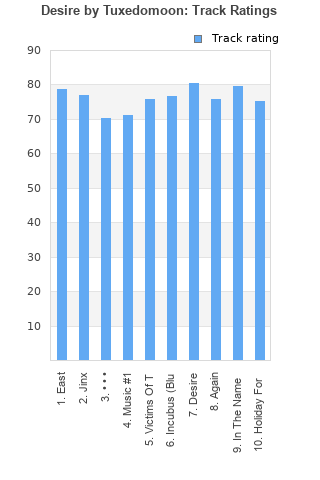 Rating metrics: Outliers can be removed when calculating a mean average to dampen the effects of ratings outside the normal distribution. This figure is provided as the trimmed mean. A high standard deviation can be legitimate, but can sometimes indicate 'gaming' is occurring. Consider a simplified example* of an item receiving ratings of 100, 50, & 0. The mean average rating would be 50. However, ratings of 55, 50 & 45 could also result in the same average. The second average might be more trusted because there is more consensus around a particular rating (a lower deviation).
(*In practice, some albums can have several thousand ratings)
This album is rated in the top 8% of all albums on BestEverAlbums.com. This album has a Bayesian average rating of 76.2/100, a mean average of 75.7/100, and a trimmed mean (excluding outliers) of 76.6/100. The standard deviation for this album is 16.8.

I first listened to this album when I was 12 years old after watching Wings of Desire by Wim Wenders, because they were part of the soundtrack. I became so obsessed with this album I think I might have listened to it a hundred times. And it amazes me how every time, it still surprises me.

One of the greatest prog/post-punk albums ever recorded, with texture and invention to spare. Dark, visual, unusual and masterfully executed. An immaculate and underrated tour de force. A psychedelic masterpiece. Difficult music indeed, for people who appreciate a challenging listen over spoon-fed regurgitated sameness.

Your feedback for Desire