Starboy (studio album) by The Weeknd 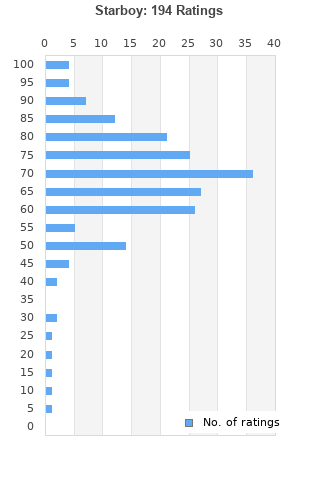 Starboy is ranked 5th best out of 11 albums by The Weeknd on BestEverAlbums.com.

The best album by The Weeknd is House Of Balloons which is ranked number 993 in the list of all-time albums with a total rank score of 1,863. 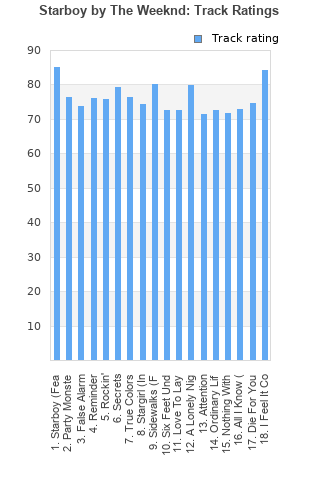 Rating metrics: Outliers can be removed when calculating a mean average to dampen the effects of ratings outside the normal distribution. This figure is provided as the trimmed mean. A high standard deviation can be legitimate, but can sometimes indicate 'gaming' is occurring. Consider a simplified example* of an item receiving ratings of 100, 50, & 0. The mean average rating would be 50. However, ratings of 55, 50 & 45 could also result in the same average. The second average might be more trusted because there is more consensus around a particular rating (a lower deviation).
(*In practice, some albums can have several thousand ratings)
This album has a Bayesian average rating of 68.9/100, a mean average of 67.5/100, and a trimmed mean (excluding outliers) of 68.7/100. The standard deviation for this album is 15.6.

Straboy is a banger. I also love the features along the way. King Kendrick Lamar is a highlight, and also the last song, I feel it Coming. His 3. best, after Dawn FM/After Hours. New Weeknd>Old Weeknd

Out of the three studio albums from Abel, this to me is my favorite. To the point of being better than Kissland. Also came a year after BBTM and is miles better than that album. Alternative R&b mixed with R&B and Synth Funk made this a concoction to die for and wish to achieve. Songs like the title track, Rockin, Secrets, I Feel It Coming and plenty of others made this a memorable and enjoyable experience. Thank you Abel and crew.

Great, wacky album. He has a great voice!

Much better than I expected. When the album dropped, every track on it went into Billboard's Hot 100. "A Lonely Night" wasn't one of the big hits from the album, but it was the most soulful song on the Hot 100 in 2016.

this album is too long, but I Feel it Coming is one of my favorite tracks in the last couple years. Such an uplifting pop song, it is virtually perfect. there are 4 or 5 other elite songs however.

Definitely weaker than Beauty Behind the Madness as an album. A few alright songs here and there but most didn't stick out to me.

Like others have said, the only problem here is the length. There are some killer tracks - the opener is the best thing he's done and Secrets is also incredible. Wish he'd trimmed it down but otherwise it's my favorite of his.

Half of this album is really good! If he cut it down to 10 songs, it would have packed a real punch and been a really great album.

Your feedback for Starboy