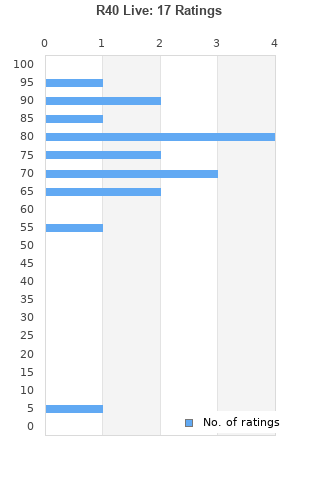 R40 Live is ranked 28th best out of 35 albums by Rush on BestEverAlbums.com.

The best album by Rush is Moving Pictures which is ranked number 153 in the list of all-time albums with a total rank score of 11,941. 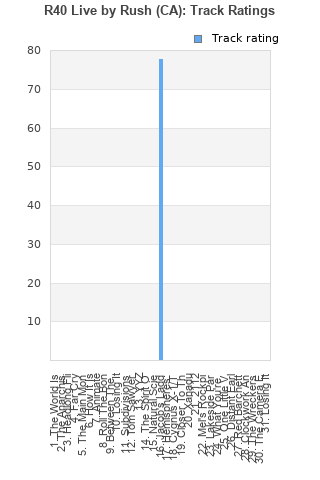 0
2.
The Anarchist
Rating: Not enough dataComments:

0
6.
How It Is
Rating: Not enough dataComments:

0
9.
Between The Wheels
Rating: Not enough dataComments:

0
14.
The Spirit Of Radio
Rating: Not enough dataComments:

0
19.
Closer To The Heart
Rating: Not enough dataComments:

0
29.
The Wreckers
Rating: Not enough dataComments:

Rating metrics: Outliers can be removed when calculating a mean average to dampen the effects of ratings outside the normal distribution. This figure is provided as the trimmed mean. A high standard deviation can be legitimate, but can sometimes indicate 'gaming' is occurring. Consider a simplified example* of an item receiving ratings of 100, 50, & 0. The mean average rating would be 50. However, ratings of 55, 50 & 45 could also result in the same average. The second average might be more trusted because there is more consensus around a particular rating (a lower deviation).
(*In practice, some albums can have several thousand ratings)
This album has a Bayesian average rating of 73.6/100, a mean average of 70.0/100, and a trimmed mean (excluding outliers) of 73.8/100. The standard deviation for this album is 18.4.

It's amazing these guys can put out a show like this after all these years. Geddy's voice isn't quite what it was and he has to sing some songs down a step, but still a phenomenal live performance across the board.

Had the pleasure of seeing the band on this tour. The DVD/CD is almost as good as my memories of that phenomenal show. Aside from the omission of La Villa Strangiato, this setlist is essentially a who's who of Rush's 40 year catalog.

To paraphrase B.B. King, "May I live forever, but may Neil Peart live forever and a day."

Your feedback for R40 Live