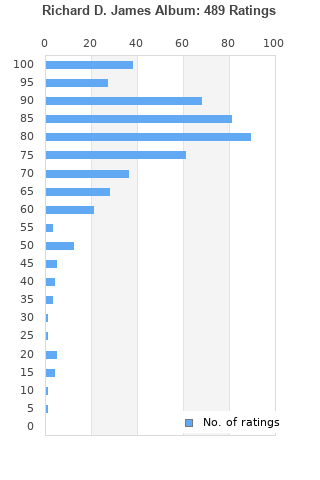 Richard D. James Album is ranked 2nd best out of 19 albums by Aphex Twin on BestEverAlbums.com.

The best album by Aphex Twin is Selected Ambient Works 85-92 which is ranked number 238 in the list of all-time albums with a total rank score of 7,597. 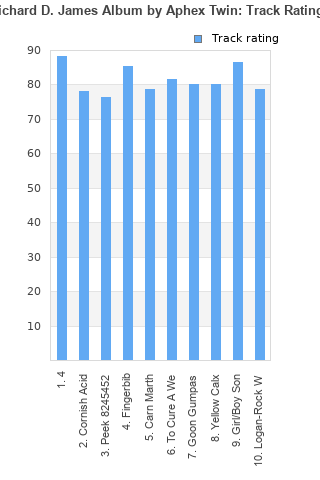 Rating metrics: Outliers can be removed when calculating a mean average to dampen the effects of ratings outside the normal distribution. This figure is provided as the trimmed mean. A high standard deviation can be legitimate, but can sometimes indicate 'gaming' is occurring. Consider a simplified example* of an item receiving ratings of 100, 50, & 0. The mean average rating would be 50. However, ratings of 55, 50 & 45 could also result in the same average. The second average might be more trusted because there is more consensus around a particular rating (a lower deviation).
(*In practice, some albums can have several thousand ratings)
This album is rated in the top 2% of all albums on BestEverAlbums.com. This album has a Bayesian average rating of 79.3/100, a mean average of 77.9/100, and a trimmed mean (excluding outliers) of 79.4/100. The standard deviation for this album is 16.4.

This album is very chaotic and erratic at times but there are also songs which are calmer and allow for us to catch a breath. The record is very short and sweet and at a 32 minute run time it will pass you by without you noticing. There is so much too explore in that time though with the music being so complex and multi-layered that you could never be bored. There are some tracks which do feel like filler rather than a crucial track on the album and there is only a handful of great songs on the record. Overall it is a short and intriguing album.

Playful and mental, the best of 90s Aphex Twin.

Personally my favorite release for RDJ, Everything on this LP sounds so incredibly lush and full. This is the mad scientist at his creative peak.

short but intense album! incredibly fast drum-programming compared with touching strings. for every fan of electronic music, jungle or IDM a must listen!!!

Not quite as good as Selected Ambient Works I, but still a good album from Aphex Twin.

Girl/Boy Song is a brilliant song in a sea of pretty good/average.

A short and sweet album with some wild tracks that showcase a different side of RDJ.

A great album. Not only is he a pioneer of chilled ambient music, he's also capable of producing complex, eclectic and downright dizzying tracks, adding up to form one truly outlandish and somewhat beautiful record. At 32 minutes, it never once drags and I had so much fun listening to all of it.