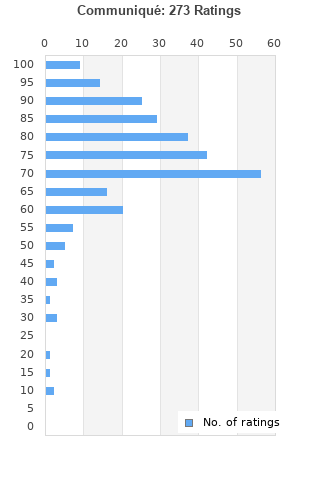 Communiqué is ranked 5th best out of 15 albums by Dire Straits on BestEverAlbums.com.

The best album by Dire Straits is Brothers In Arms which is ranked number 226 in the list of all-time albums with a total rank score of 8,281. 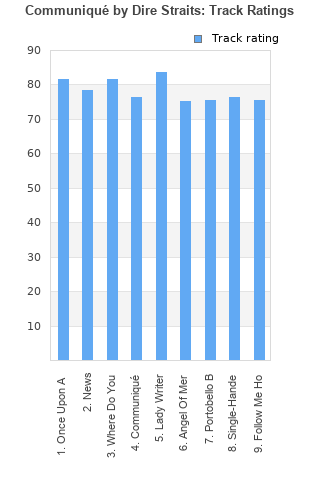 Rating metrics: Outliers can be removed when calculating a mean average to dampen the effects of ratings outside the normal distribution. This figure is provided as the trimmed mean. A high standard deviation can be legitimate, but can sometimes indicate 'gaming' is occurring. Consider a simplified example* of an item receiving ratings of 100, 50, & 0. The mean average rating would be 50. However, ratings of 55, 50 & 45 could also result in the same average. The second average might be more trusted because there is more consensus around a particular rating (a lower deviation).
(*In practice, some albums can have several thousand ratings)
This album is rated in the top 10% of all albums on BestEverAlbums.com. This album has a Bayesian average rating of 75.5/100, a mean average of 74.4/100, and a trimmed mean (excluding outliers) of 75.6/100. The standard deviation for this album is 15.5.

A masterful album, some exquisite touches, cool cruisey rhythms, good hooks and sublime sounds. I bought this on cassette tape in my penultimate year of high school, was one of my high rotate albums that year, most enjoyed very late Sunday evening as wind down/chillax, head phones on! Tape got mangled a long time ago, so listening again over 40 years later on Spotify and thanks to BEA for getting me to rethink what ARE great albums and redisco er again old treasures. This album is not as raw or perhaps quite as exciting as the debut album, nor as popular with big hits as later albums, but this album is consistently good, very high quality and perhaps a bridge between 1st and later. Probably a good reason Knopfler and Pickett were invited to play on Dylan's A Slow Train Coming later that year

Probably my favourite Dire Straits album - certainly the one I play the most. I could never understand why it was less revered than their other offerings.

To me, their best album. Captures them at the turning point between raw and a product.

Some shite written about this one on here. Anyways, I never thought I thought I'd get back into listening to these. This and the debut are sounding fantastic to me at the moment. Got both on recent repress vinyl and wonderful jobs have been made with both. You can't can't beat sitting back late at night with a drink and this or the debut bon the rekid player. Not fussed about anything else they did nowadays but they'd already nailed it with those two anyways.

Nice, mostly mellow second album by Mark Knopfler and the boys. Great album to relax to. Mr. Knopfler's guitar work is extraordinary on this one. Pick this one up if you're a fan of Dire Straits or Mark's wonderful playing.

I love this album. It is the best dire straits album even though it contains none of their hits (Which were too commercial for my liking). Communique is understated but is the perfect blend of Knopfler’s guitar and vocals, and Wither’s drums. I have listened to it 100s of times and never been disappointed.

Has some of their best songs, but it's very inconsistent. Still great though

To my ears, all of the Straits' records between 1978-1985 could interchangeaby be considered their best work, but I'm not okay with a 5 way tie.

Your feedback for Communiqué