The Ghosts Of Highway 20 (studio album) by Lucinda Williams 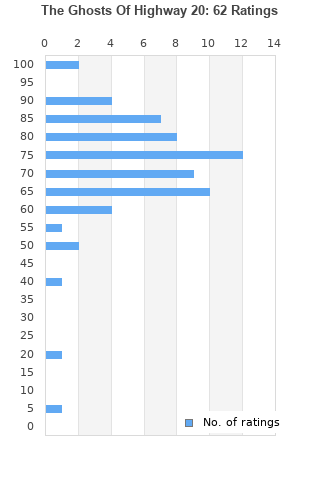 The Ghosts Of Highway 20 is ranked 4th best out of 21 albums by Lucinda Williams on BestEverAlbums.com.

The best album by Lucinda Williams is Car Wheels On A Gravel Road which is ranked number 766 in the list of all-time albums with a total rank score of 2,407. 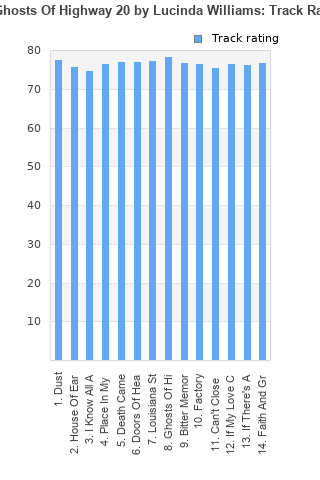 The Ghosts Of Highway 20 rankings

The Ghosts Of Highway 20 collection

The Ghosts Of Highway 20 ratings

Rating metrics: Outliers can be removed when calculating a mean average to dampen the effects of ratings outside the normal distribution. This figure is provided as the trimmed mean. A high standard deviation can be legitimate, but can sometimes indicate 'gaming' is occurring. Consider a simplified example* of an item receiving ratings of 100, 50, & 0. The mean average rating would be 50. However, ratings of 55, 50 & 45 could also result in the same average. The second average might be more trusted because there is more consensus around a particular rating (a lower deviation).
(*In practice, some albums can have several thousand ratings)
This album has a Bayesian average rating of 73.6/100, a mean average of 71.7/100, and a trimmed mean (excluding outliers) of 73.7/100. The standard deviation for this album is 15.0.

The Ghosts Of Highway 20 favourites

The Ghosts Of Highway 20 comments

Another great album from Lu. Never done a duff album. Everyone has something of interest. Consistently great artist

There aren't many artists that can keep such a high level of level of inspiration as Lucinda Williams. Now into her fourth decade as a recording artist, Williams says she finds inspiration and comfort in NOT getting comfortable. She describes this record as Car Wheels on a Gravel Road part 2, except the woman who is singing about her childhood is now twenty years older and wiser.

Another great album from Lucinda she just gets better with age. Her southern drawl works on these sad melancholy songs. This album needs more than one or two listens before it sinks in and touches you. The standout tracks are Dust, Place In My Heart, Louisiana Story, the title track & If My Love Could Kill but the rest are all good. Released in the same year as Blackstar & Skeleton Tree these 3 albums are the saddest releases in a long time.

Maybe it's just me, but this album didn't sit well with me. I really liked the guitar in the first tracks. They had a simple beat. They sounded nice, nothing ground-breaking but nothing gripping either, just standard. So I tried to focus on the lyrics. And for each song I just listened like... I'm supposed to feel something right? The songs felt void of heart. This doesn't go for every song. For instance, "Louisiana Story" is a decent track. But other songs like "Death Came" describes a death of a loved one, but describes the event by saying little more than "death came and gave you a kiss". Simply telling me that someone died isn't enough to make me feel emotional. I felt like most other songs on this album played out similarly. She would take a concept that could be sad but doesn't detail it enough to make it personal in the slightest.

Something about Lucinda's voice that I don't like as much as her 80s, 90s, and even early 2000s output. But this album has solid songs and reminds me a bit of the feel on World Without Tears and West, which were both excellent albums.

I think this one will get better with each listen (and it seems as though the 2nd half is better than the first in many ways).

Your feedback for The Ghosts Of Highway 20