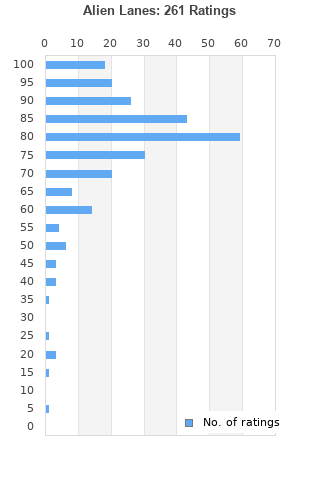 Alien Lanes is ranked 2nd best out of 54 albums by Guided By Voices on BestEverAlbums.com.

The best album by Guided By Voices is Bee Thousand which is ranked number 485 in the list of all-time albums with a total rank score of 3,834. 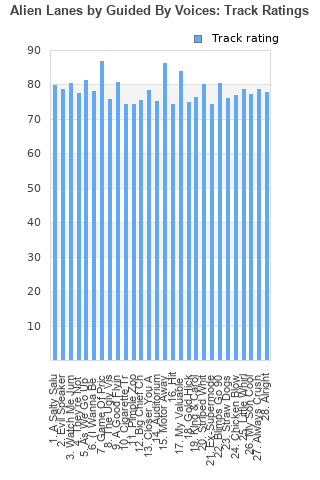 Rating metrics: Outliers can be removed when calculating a mean average to dampen the effects of ratings outside the normal distribution. This figure is provided as the trimmed mean. A high standard deviation can be legitimate, but can sometimes indicate 'gaming' is occurring. Consider a simplified example* of an item receiving ratings of 100, 50, & 0. The mean average rating would be 50. However, ratings of 55, 50 & 45 could also result in the same average. The second average might be more trusted because there is more consensus around a particular rating (a lower deviation).
(*In practice, some albums can have several thousand ratings)
This album is rated in the top 2% of all albums on BestEverAlbums.com. This album has a Bayesian average rating of 79.7/100, a mean average of 78.4/100, and a trimmed mean (excluding outliers) of 80.0/100. The standard deviation for this album is 16.0.

This is such a unique and brilliant way of approaching an album. Every song is a short snippet that never over stays its welcome and in most cases is also a brilliant song. This record definitely takes a few listens before you really grasp it but after that it is just 41 minutes of new, quick and exciting cuts. This makes it a very exhilarating album to experience. However, the criticisms on this record are very strong as well, with a lot of the songs sounding incomplete and if they were given a bit more time they could be incredible tracks but they are cut short. This is disappointing as all the factors of a fantastic album are present. Overall, if the track listing was trimmed down a bit and then that time put into fully developing the better songs this could be one of the greatest albums of all time but due to this not being the case it falls short.

Such a disappointment. So many songs that I'm sure I would like if they weren't 30 seconds long. It's as if Robert gets bored very easily. Don't see the point to writing songs that short. Frustrating.

It's not that I didn't like it so much as it didn't really impress me.

Cuddos to the community here coming up with some great descriptions of GBV. "Broken radio" and "artists sketchbook" for sure, and I love it. This one deserves to be equally well thought of as Bee Thousand IMO.

Every time I hear this album I go through the same thought process: I think it's awful for the first 10 or so songs, and then from Motor Away on I think it's perfect. My favorite GBV album before listening to it is always Bee Thousand, and after listening to it my favorite GBV album is always Alien Lanes. What I'm saying is that it might be the most back-loaded album of all time. It takes fewer chances than its predecessor, but it also crafts some way more catchy songs. Motor Away is probably the band's best song, and Blimps Go 90, Always Crush Me, Game of Pricks, and Striped White Jets are all incredible as well. Not the blissful mess that Bee Thousand is but it's its own kind of fun.

Sending help messages in morse code from the middle of nowhere. Meanwhile on the other end of the line, it sounds like you're browsing channels on the radio. So basically, you're fucked.

My broken radio keeps switching stations, but I can’t complain when every song has been fantastic.

i love the lo-fi sound and the atmosphere it creates. a very good record filled with many good ideas and beautiful tunes.

Your feedback for Alien Lanes