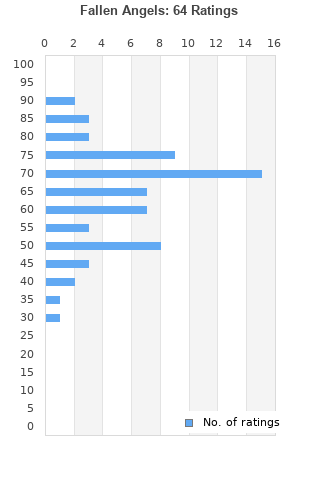 Music CD Bob Dylan Fallen Angels
Condition: Very Good
Time left: 18h 53m 9s
Ships to: Worldwide
£4.64
Go to store
Product prices and availability are accurate as of the date indicated and are subject to change. Any price and availability information displayed on the linked website at the time of purchase will apply to the purchase of this product.  See full search results on eBay

Fallen Angels is ranked 48th best out of 70 albums by Bob Dylan on BestEverAlbums.com.

The best album by Bob Dylan is Highway 61 Revisited which is ranked number 23 in the list of all-time albums with a total rank score of 41,211. 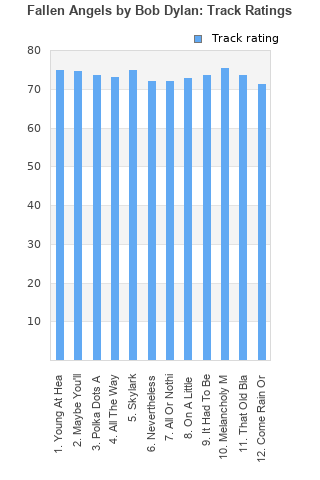 Rating metrics: Outliers can be removed when calculating a mean average to dampen the effects of ratings outside the normal distribution. This figure is provided as the trimmed mean. A high standard deviation can be legitimate, but can sometimes indicate 'gaming' is occurring. Consider a simplified example* of an item receiving ratings of 100, 50, & 0. The mean average rating would be 50. However, ratings of 55, 50 & 45 could also result in the same average. The second average might be more trusted because there is more consensus around a particular rating (a lower deviation).
(*In practice, some albums can have several thousand ratings)
This album has a Bayesian average rating of 66.8/100, a mean average of 65.6/100, and a trimmed mean (excluding outliers) of 65.6/100. The standard deviation for this album is 13.1.

By no means a bad album but Bob is one of, if not, the best songwriters of all time so you always want original material from him. It's a nice enough covers album my I won't be playing it that often.

I was a bit disappointed that he hasn't release an album with own songs. All in all he and his band sound nice with that good old traditional pop music. But all the critics praised his voice and I didn't agree with them. In my opinion in blues or folk rock songs his memorable voice matches better.

I've always known Dylan's strengths are based mostly in his songwriting. However, this and his previously released cover album, Shadows in the Night, still have an air of authenticity and emotion that has always resonated through his work. Certainly not his greatest album, but Fallen Angels proves to be a relaxing listen, and recommended if you're a fan of his modern albums, especially if you enjoyed his last release.

The sequel to, shadows in the night, fallen Angels takes up where that album left off. Again, it features a collection of standards predominately covered by Frank Sinatra. Young at heart, is nice, as is, maybe you'll be there, and, all or nothing at all, but as on the last record it all adds up to, so what? Dylan's voice is just about passable, although it's nothing compared to Sinatra, but everything is in the same key and Dylan's voice is the same all the way through. Most of it's fine, although, that old black magic, is all over the place, it's tuneless and dull. Best tracks though are, all the way, and, come rain or shine. All in all, it's acceptable, but hopefully that will be it now, surely Dylan has got it out if his system. My only worry is he has quit writing songs and will just keep churning out this stuff again and again, let's wait and see. So-so.

Your feedback for Fallen Angels