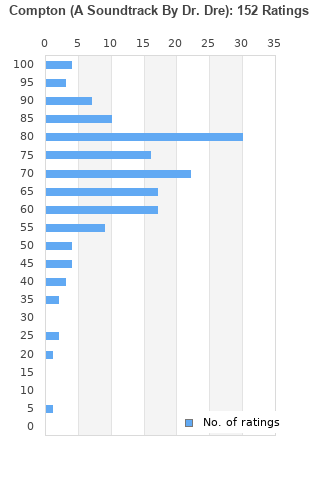 DR. DRE-COMPTON-JAPAN CD+BOOK G07
Condition: Brand New
Time left: 13h 16m 32s
Ships to: Worldwide
$31.49
Go to store
Product prices and availability are accurate as of the date indicated and are subject to change. Any price and availability information displayed on the linked website at the time of purchase will apply to the purchase of this product.  See full search results on eBay

Compton is ranked 3rd best out of 5 albums by Dr. Dre on BestEverAlbums.com.

The best album by Dr. Dre is The Chronic which is ranked number 446 in the list of all-time albums with a total rank score of 4,387. 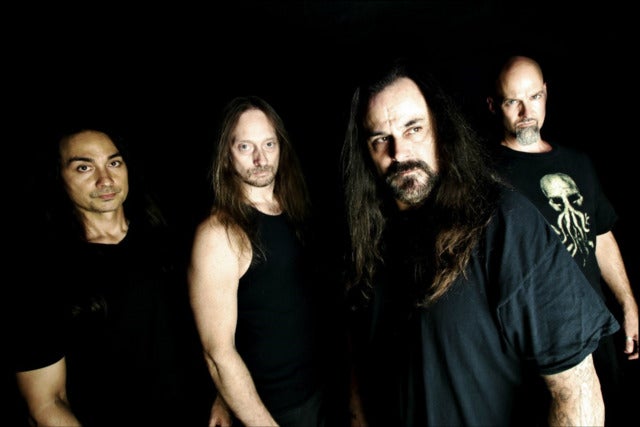 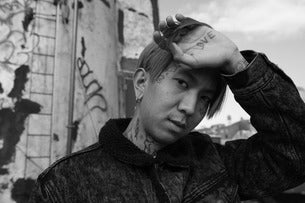 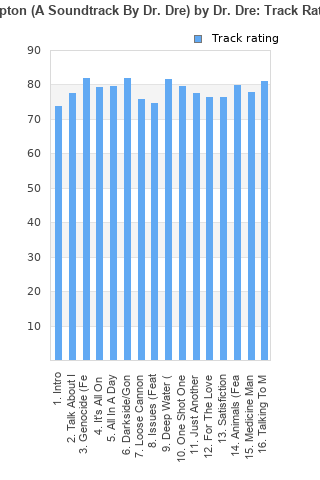 Rating metrics: Outliers can be removed when calculating a mean average to dampen the effects of ratings outside the normal distribution. This figure is provided as the trimmed mean. A high standard deviation can be legitimate, but can sometimes indicate 'gaming' is occurring. Consider a simplified example* of an item receiving ratings of 100, 50, & 0. The mean average rating would be 50. However, ratings of 55, 50 & 45 could also result in the same average. The second average might be more trusted because there is more consensus around a particular rating (a lower deviation).
(*In practice, some albums can have several thousand ratings)
This album has a Bayesian average rating of 71.0/100, a mean average of 70.1/100, and a trimmed mean (excluding outliers) of 70.9/100. The standard deviation for this album is 15.7.

The best sounding record i've ever heard, despite the very crushed mastering. Dre has the best ears in hip hop history. The way the tracks connect.. it makes the sequencing on a lot of other albums look lazy.

Was definitively not expecting that. Excellent album beyond expectations, Dre's production sound great and current. The features do an excellent job.

Not really a party album like the dr.'s first two records. Much more like a movie. Not as much fun as the first two but still epic and hard hitting and actually better in some respects than his first two classics even though I still prefer them. This is no afterthought but a real possible future classic. Love the cinematic quality of the album maybe why it's referred to as a soundtrack. The dr still got it.

Solid. Dre's best work (especially as 'his' album) in ages.

Seemed to come and go very, very quickly but was one of the best hip-hop albums of 2015. It's obviously not as good as Chronic or 2001, but Dre does a very good job at creating a modern sound while keeping his signature sound. He also pulls in stellar features, such as Kendrick Lamar and Anderson .Paak. It's a little too lengthy and it falls short in some parts, but overall, I really couldn't ask for more.

Dre's most complete and consistent work to date. We see his evolution from minimal synths and occasional jazz instrumentation to what feels at times like a full-fledged hip-hop album with trap and rock influences.

Hasn't grown on me at all. I liked it during first few listens, now only a few songs stand out.

Really good, very compelling. Hard to stop listening! It's nothing like Dre's earlier work (don't expect a 2001-style update of his famous g-funk style). Kendrick guests a few times, but it's almost more similar to Kanye's work, "Late Registration" and "Graduation" especially. Pop hooks but deep and dark feelings. If not for "To Pimp a Butterfly" this year and Dre's insistence on avoiding being on Spotify, this would get way more attention.

I have to say that I am pretty surprised that it did not suck. I don't know why, but I expected it to be deceiving. But so far, I enjoyed almost every portion of it.
It will not be a «game changer» like people happened to call his previous albums, but it is still a great composition with a nice concept. Good job Dre, nice to see you back.

Your feedback for Compton