The best album credited to Derek & The Dominos is Layla And Other Assorted Love Songs which is ranked number 243 in the overall greatest album chart with a total rank score of 7,997.

Derek & The Dominos is ranked number 262 in the overall artist rankings with a total rank score of 8,180.

CD: DEREK LOUX, FRAGRANT OFFERING (2004) has great cover of a David Ruis Song
Condition: Very Good
Time left: 21m 5s
Ships to: Worldwide
$11.69
Go to store
Product prices and availability are accurate as of the date indicated and are subject to change. Any price and availability information displayed on the linked website at the time of purchase will apply to the purchase of this product.  See full search results on eBay

The following albums by Derek & The Dominos are ranked highest in the greatest album charts:

1.
Layla And Other Assorted Love Songs

1
3.
Live At The Fillmore
Live

This may not be a complete discography for Derek & The Dominos.This listing only shows those albums by this artist that appear in at least one chart on this site. If an album is 'missing' that you think deserves to be here, you can include it in your own chart from the My Charts page!

5
(from the album Layla And Other Assorted Love Songs)
3.
Little Wing
Rating: 87 (147 votes)Comments:

4
(from the album Layla And Other Assorted Love Songs)
5.
Keep On Growing
Rating: 85 (139 votes)Comments:

2
(from the album Layla And Other Assorted Love Songs)
8.
Nobody Knows You When You're Down And Out
Rating: 83 (136 votes)Comments:

4
(from the album Layla And Other Assorted Love Songs)
9.
Have You Ever Loved A Woman
Rating: 83 (133 votes)Comments:

3
(from the album Layla And Other Assorted Love Songs)
10.
Thorn Tree In The Garden
Rating: 82 (126 votes)Comments:

4
(from the album Layla And Other Assorted Love Songs)
N.B. Tracks must have received at least 3 ratings to appear in the above list. 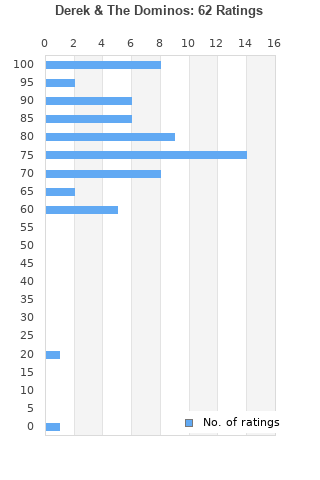 Rating metrics: Outliers can be removed when calculating a mean average to dampen the effects of ratings outside the normal distribution. This figure is provided as the trimmed mean. A high standard deviation can be legitimate, but can sometimes indicate 'gaming' is occurring. Consider a simplified example* of an item receiving ratings of 100, 50, & 0. The mean average rating would be 50. However, ratings of 55, 50 & 45 could also result in the same average. The second average might be more trusted because there is more consensus around a particular rating (a lower deviation).
(*In practice, some artists can have several thousand ratings)
This artist is rated in the top 3% of all artists on BestEverAlbums.com. This artist has a Bayesian average rating of 80.1/100, a mean average of 78.5/100, and a trimmed mean (excluding outliers) of 81.0/100. The standard deviation for this artist is 17.4.

Great jam band. Clapton and Allman never played so well as when they were together, pushing each other.

Forever defined by one song - there's other good stuff here too.

After the break-up of Blind Faith, Eric Clapton wanted to lose his ‘rock superstar’ status and formed a band based on a trio of very able musicians in Carl Radle, Jim Gordon and Bobby Whitlock, who were essentially Delaney & Bonnie’s backing band. Duane Allman was also an occasional member in the studio. The band was very short-lived being active for only a year and recording just one studio album. Most of their time was spent touring the UK, playing mainly small venues. Drink and both hard and soft drugs were very much part of the picture and it would be during this period that Clapton would become a heroin addict.

excuse me but this is top ten material...........bruce springsteen, david bowie, and prince are better than this?

Your feedback for Derek & The Dominos