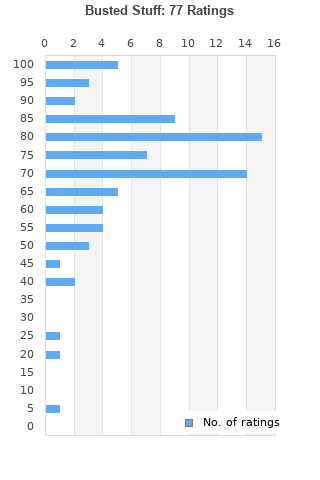 Busted Stuff is ranked 5th best out of 60 albums by Dave Matthews Band on BestEverAlbums.com.

The best album by Dave Matthews Band is Crash which is ranked number 1543 in the list of all-time albums with a total rank score of 1,131. 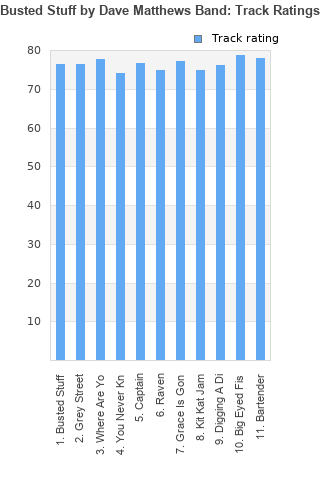 Rating metrics: Outliers can be removed when calculating a mean average to dampen the effects of ratings outside the normal distribution. This figure is provided as the trimmed mean. A high standard deviation can be legitimate, but can sometimes indicate 'gaming' is occurring. Consider a simplified example* of an item receiving ratings of 100, 50, & 0. The mean average rating would be 50. However, ratings of 55, 50 & 45 could also result in the same average. The second average might be more trusted because there is more consensus around a particular rating (a lower deviation).
(*In practice, some albums can have several thousand ratings)
This album has a Bayesian average rating of 72.9/100, a mean average of 71.9/100, and a trimmed mean (excluding outliers) of 72.9/100. The standard deviation for this album is 17.6.

Good return to form after the misery of "Everyday."

Most people know DMB's first 3 albums and gave up on them after the super pop of Everyday.

Busted Stuff is a welcome return and it's too bad many people missed it because it's their best album.

With only one weak track in You Never Know, Busted Stuff is excellent from start to finish.

Originally leaked and known as the LillyWhite Sessions, there are a few songs that didn't make Busted Stuff that were excellent as well.

Grey Street, Grace is Gone, Digging Your Ditch, and Bartender are all standout tracks.

Dave Matthews is pretty depressed here and may hide inside of a bottle too frequently, but the anguish is captivating.

Fantastic rebound after the disappointment that was Everyday. Busted Stuff reclaimed their past glories and in some ways surpassed it. If they had a better lead of track this album could have been their best ever.

By this point most of my friends were done with DMB, but they missed out on a good album that returns them to their more standard sound.

Your feedback for Busted Stuff