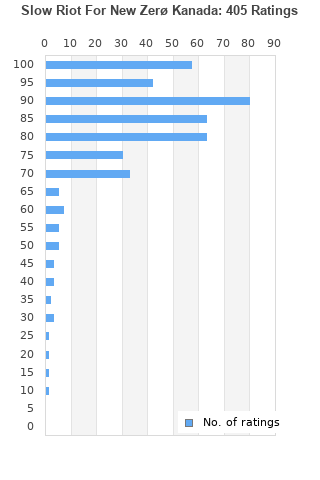 Slow Riot for New Zero Kanada CD Godspeed You! Black Emperor Kranky CST ASMZ
Condition: Very Good
Time left: 2d 21h 11m 16s
Ships to: Worldwide
$7.77
Go to store
Product prices and availability are accurate as of the date indicated and are subject to change. Any price and availability information displayed on the linked website at the time of purchase will apply to the purchase of this product.  See full search results on eBay

Slow Riot For New Zerø Kanada is ranked 3rd best out of 7 albums by Godspeed You! Black Emperor on BestEverAlbums.com.

The best album by Godspeed You! Black Emperor is Lift Yr. Skinny Fists Like Antennas To Heaven which is ranked number 85 in the list of all-time albums with a total rank score of 18,634.

Listen to Slow Riot For New Zerø Kanada on YouTube 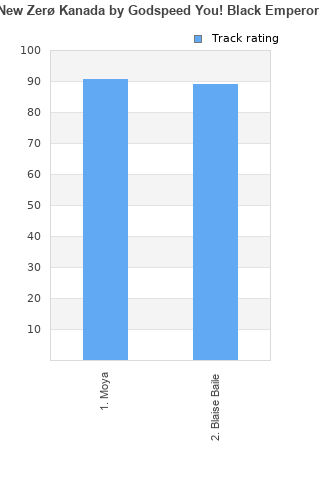 Rating metrics: Outliers can be removed when calculating a mean average to dampen the effects of ratings outside the normal distribution. This figure is provided as the trimmed mean. A high standard deviation can be legitimate, but can sometimes indicate 'gaming' is occurring. Consider a simplified example* of an item receiving ratings of 100, 50, & 0. The mean average rating would be 50. However, ratings of 55, 50 & 45 could also result in the same average. The second average might be more trusted because there is more consensus around a particular rating (a lower deviation).
(*In practice, some albums can have several thousand ratings)
This album is rated in the top 1% of all albums on BestEverAlbums.com. This album has a Bayesian average rating of 83.6/100, a mean average of 82.3/100, and a trimmed mean (excluding outliers) of 83.9/100. The standard deviation for this album is 15.4.

I thinks this is their 2nd Best, amazing and atmospheric

Easily the best project they ever did, 28 minutes of pure greatness without a single dull moment.

This should be ranked way higher.

The greatest thing they ever did. If I included EPs on my charts this would have been way up high.

This album is 30 minutes of pure, raw emotion. There is not a single moment in it that does not fully grab my attention

Some of the band's best material brought down only a little due to the sampling choice.

Why isn't this ranked higher?

Your feedback for Slow Riot For New Zerø Kanada