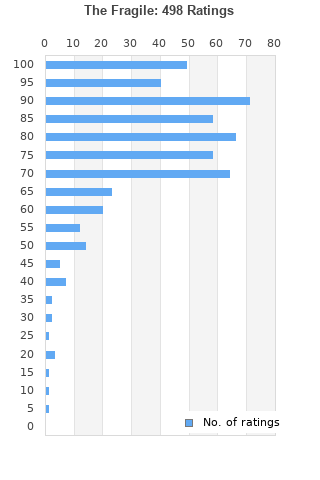 NINE INCH NAILS The Fragile 2x CD industrial trent reznor killing joke laibach
Condition: Good
Time left: 1d 3h 35m 35s
Ships to: Worldwide
$9.00
Go to store
Product prices and availability are accurate as of the date indicated and are subject to change. Any price and availability information displayed on the linked website at the time of purchase will apply to the purchase of this product.  See full search results on eBay

The Fragile is ranked 3rd best out of 21 albums by Nine Inch Nails on BestEverAlbums.com.

The best album by Nine Inch Nails is The Downward Spiral which is ranked number 142 in the list of all-time albums with a total rank score of 12,586. 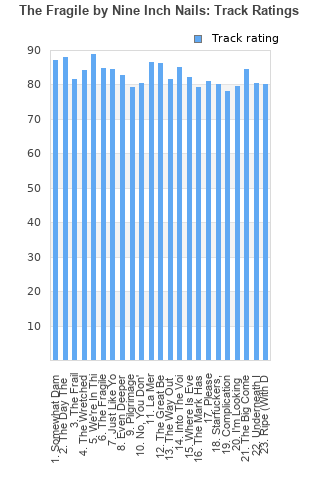 Rating metrics: Outliers can be removed when calculating a mean average to dampen the effects of ratings outside the normal distribution. This figure is provided as the trimmed mean. A high standard deviation can be legitimate, but can sometimes indicate 'gaming' is occurring. Consider a simplified example* of an item receiving ratings of 100, 50, & 0. The mean average rating would be 50. However, ratings of 55, 50 & 45 could also result in the same average. The second average might be more trusted because there is more consensus around a particular rating (a lower deviation).
(*In practice, some albums can have several thousand ratings)
This album is rated in the top 3% of all albums on BestEverAlbums.com. This album has a mean average rating of 78.0/100. The trimmed mean (excluding outliers) is 78.8/100. The standard deviation for this album is 16.7.

Too long , too long by CD 2 too long bar "Starfuckers"

The Fragile is a fantastic emotional journey through sound and perhaps Trent's best work.

Impresive work. Highly recommended to every one.

Love the sound Trent was going for on this record. Huge record but I love every second. There is some filler but personally, I think NIN tends to blend these tracks very well together within the rest of the stand-outs creating and re-enforcing the thematic concept of the album to make an exceptional experience.

If he had thrown out the last nine songs, this would probably be in my top 100. Still good though.

Really great album from NIN. Long, but quality tracks throughout. Starfuckers doesn't really feel like it belongs on the album, not a weak track, but a really poor fit. Pilgrimage doesn't do anything for me either. Besides that, not really anything to complain about on this album. Into the Void and Somewhat Damaged are the top tracks on the album. Not quite as good as Downward Spiral, but not far behind.

I didn't get it. Maybe next time.

The lenght is okay, but they need to delete some songs from it. My favourites are Somewhat Damaged, The Big Come Down and We're In This Together Now. The last tracks are also great.
One thing I habe to said, is that the 90's NIN artworks weren't brilliant, a seashell? a tree? A great band overall

At the end of the 20th Century comes the 21st Century sequel to Pink Floyd's 'The Wall'. Play loud. Be prepared to be sonically flayed, de-constructed & purified. Highlight - 'The Great Below', the perfect ballad for the isolationist cyber society.

Your feedback for The Fragile