Keep It Like A Secret (studio album) by Built To Spill 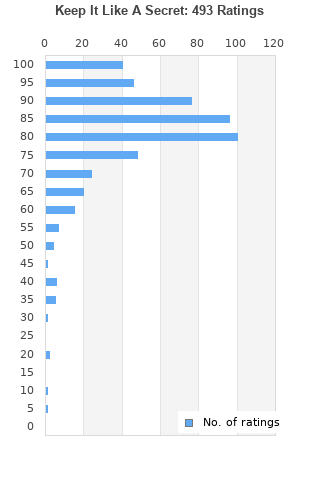 Built To Spill ‎- Keep It Like A Secret 2 x LP - Vinyl Album - SEALED NEW Record
Condition: New
Time left: 2d 4h 39m 59s
Ships to: Worldwide
$44.79
Go to store
Product prices and availability are accurate as of the date indicated and are subject to change. Any price and availability information displayed on the linked website at the time of purchase will apply to the purchase of this product.  See full search results on eBay

Keep It Like A Secret is ranked 2nd best out of 12 albums by Built To Spill on BestEverAlbums.com.

The best album by Built To Spill is Perfect From Now On which is ranked number 293 in the list of all-time albums with a total rank score of 6,776. 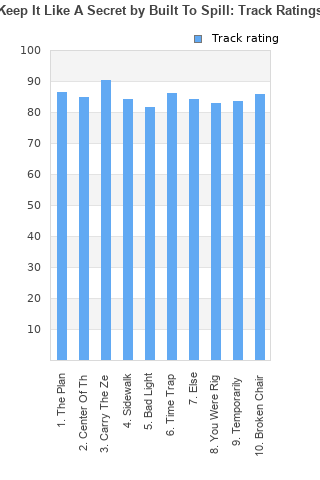 Rating metrics: Outliers can be removed when calculating a mean average to dampen the effects of ratings outside the normal distribution. This figure is provided as the trimmed mean. A high standard deviation can be legitimate, but can sometimes indicate 'gaming' is occurring. Consider a simplified example* of an item receiving ratings of 100, 50, & 0. The mean average rating would be 50. However, ratings of 55, 50 & 45 could also result in the same average. The second average might be more trusted because there is more consensus around a particular rating (a lower deviation).
(*In practice, some albums can have several thousand ratings)
This album is rated in the top 1% of all albums on BestEverAlbums.com. This album has a Bayesian average rating of 82.5/100, a mean average of 81.2/100, and a trimmed mean (excluding outliers) of 82.7/100. The standard deviation for this album is 14.7.

The instrumentation and songwriting are great on this album, the vocals are not as strong. But overall a great experience.

My favorite Built to Spill album. Perfect From Now On is great but it’s a little harder to digest. These songs are a little more punchy and less dense, but in a great way. A really great record.

Favorites: Center Of The Universe, Carry The Zero, Time Trap

Bad Light is by far the worst rated song here, and it's my favourite from the album. That speaks volumes of the quality of this masterpiece. Perfect From Now On is still a bit better, but that's just nuances.

I love Perfect From Now On, but I think this one may be every bit as good.

For me, this album takes the expansive, adventurous sound of Perfect From Now On and compresses it into its most compact, perfect form. Brimming with melodic invention and some of Doug Martsch’s tightest songwriting, every track on Keep It Like a Secret is a knockout in its own way. It hooked me from my very first listen, years ago, and I’m still playing it today. Easily one of my all-time favorites!

I'm not normally a big shoegaze fan, but this album really stands out. Historic, essential and monumental indie for a reason.

When I worked on my crappy college radio show, there were a tonne of indie bands that sounded like Built to Spill. Is that why I don't find this album that interesting?

The best thing one can do is mine the BTS catalogue and 'Keep It Like A Secret ' is another gem to uncover . The tracks here are more concise than previous releases creating a more accessible / punchy listen

Barring "Else" every track here is outstanding and classic BTS

Whilst "You Were Right" quoting Pink Floyd , Marley , Led Zep , Kansas ..... just to name a few plus the 8 minute "Broken Chairs" (with cool whistling section) are modern classics and 2 of the best ever BTS tracks

While not being as good as their 2 previous efforts, it still manages to get me so excited. 8.4/10.