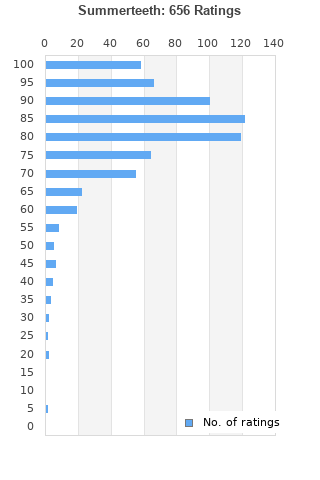 Summerteeth is ranked 2nd best out of 19 albums by Wilco on BestEverAlbums.com.

The best album by Wilco is Yankee Hotel Foxtrot which is ranked number 48 in the list of all-time albums with a total rank score of 24,168. 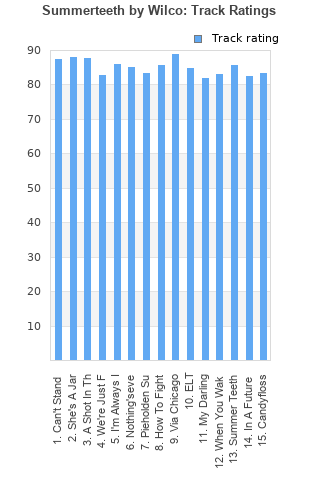 Rating metrics: Outliers can be removed when calculating a mean average to dampen the effects of ratings outside the normal distribution. This figure is provided as the trimmed mean. A high standard deviation can be legitimate, but can sometimes indicate 'gaming' is occurring. Consider a simplified example* of an item receiving ratings of 100, 50, & 0. The mean average rating would be 50. However, ratings of 55, 50 & 45 could also result in the same average. The second average might be more trusted because there is more consensus around a particular rating (a lower deviation).
(*In practice, some albums can have several thousand ratings)
This album is rated in the top 1% of all albums on BestEverAlbums.com. This album has a Bayesian average rating of 82.5/100, a mean average of 81.6/100, and a trimmed mean (excluding outliers) of 82.6/100. The standard deviation for this album is 13.5.

Simply gets better with age and if you’re a fan check out the Deluxe Edition which came out in 2020 featuring the original album, a whole bunch of demos and alternative album tracks as well as an entire Wilco concert for nearly 4 and a half hours of Summerteeth goodness

I don't know, this album is just fun, i really like the vibe in It, kind of The Beach Boys'esque, in the sense that even when it's sad, it's happy.

Oh my god who do you have to sell your soul to, to be able to make music this good?! Goddamn!

This should regarded as THE Wilco album , but I'm comfortable and can sleep at night that YHF is

'Summerteeth' is the summation of everything that is great about Wilco: wonderful pop nuggets , lush melodies , memorable and at times dark lyrics . Every little bit of every Wilco album is on this album & is a great starting point if you've never heard Wilco before

Track for track its pretty amazing

"Something In My Veins Bloodier Than Blood"

best tracks: i'm always in love, a shot in the arm, she's a jar

When I see it on my list this high I realize it's a bit to high on my chart, even though I adore some songs...

Beautiful album, especially in the first half. Very high quality songwriting with beatles-like melodies and a blend of psychedelic and alternative sound. This is the first Wilco album I listened to, and I'm looking forward to get more

Although Yankee Hotel Foxtrot is the fan favorite, I think Summerteeth is waaaaaaaayyayyayayayayayayayayay better