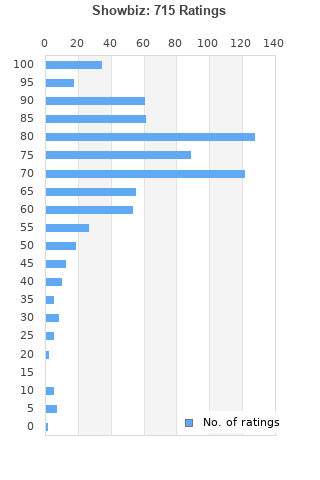 Showbiz is ranked 5th best out of 17 albums by Muse on BestEverAlbums.com.

The best album by Muse is Absolution which is ranked number 181 in the list of all-time albums with a total rank score of 9,672. 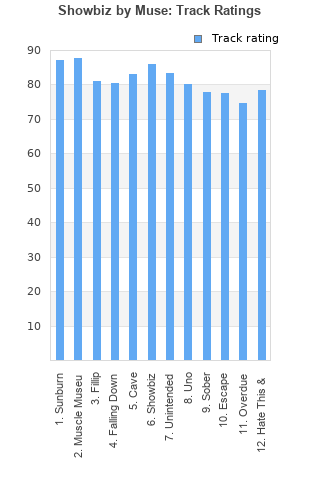 Rating metrics: Outliers can be removed when calculating a mean average to dampen the effects of ratings outside the normal distribution. This figure is provided as the trimmed mean. A high standard deviation can be legitimate, but can sometimes indicate 'gaming' is occurring. Consider a simplified example* of an item receiving ratings of 100, 50, & 0. The mean average rating would be 50. However, ratings of 55, 50 & 45 could also result in the same average. The second average might be more trusted because there is more consensus around a particular rating (a lower deviation).
(*In practice, some albums can have several thousand ratings)
This album has a Bayesian average rating of 73.2/100, a mean average of 71.9/100, and a trimmed mean (excluding outliers) of 73.2/100. The standard deviation for this album is 17.6.

Raw and passionate, this has always been my favorite Muse album.

"Sunburn" and "Muscle Museum" are the fan favourites, and for good reason, but my personal favourites are "Cave" and "Showbiz".

Call me crazy but I think this is Muse's most consistent album, even if it doesn't contain any of their top songs

Some great songs on this album.

For me this is The Bends II, the lesser Bends.

Great dayview album, one of their best I'd say.

Several killer songs but this is not the Muse I love. Straightforward pop rock/alt rock, not nearly as interesting as OOS

Muse's debut album is killer through the first 7 songs. Then it literally sucks the rest of the way.

Really any of the first seven songs are winners.

Your feedback for Showbiz