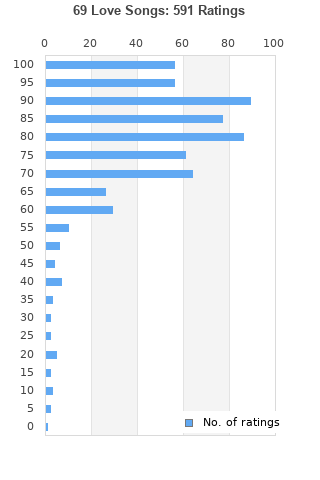 The Magnetic Fields : 69 Love Songs CD 3 discs (2004) FATBOX
Condition: Very Good
Time left: 4d 1h 42m 4s
Ships to: Worldwide
£1.50
Go to store
Product prices and availability are accurate as of the date indicated and are subject to change. Any price and availability information displayed on the linked website at the time of purchase will apply to the purchase of this product.  See full search results on eBay

69 Love Songs is ranked as the best album by The Magnetic Fields. 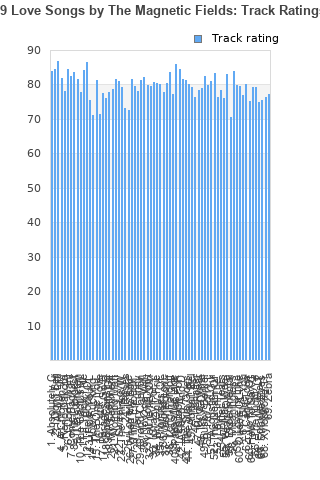 Rating metrics: Outliers can be removed when calculating a mean average to dampen the effects of ratings outside the normal distribution. This figure is provided as the trimmed mean. A high standard deviation can be legitimate, but can sometimes indicate 'gaming' is occurring. Consider a simplified example* of an item receiving ratings of 100, 50, & 0. The mean average rating would be 50. However, ratings of 55, 50 & 45 could also result in the same average. The second average might be more trusted because there is more consensus around a particular rating (a lower deviation).
(*In practice, some albums can have several thousand ratings)
This album is rated in the top 2% of all albums on BestEverAlbums.com. This album has a Bayesian average rating of 80.7/100, a mean average of 79.2/100, and a trimmed mean (excluding outliers) of 80.9/100. The standard deviation for this album is 16.8.

Ambitious and worthwhile in doses. A lot of ideas, not all of them good. Three hours on a theme is pretty self-indulgent, but the individual tracks generally don't overstay their welcomes.

The best album inside the top 500 you’ve never heard of ? Probably

I do like me a good album challenge and this ones a biggy at 69 tracks and 3 hours requiring something of a life style choice to fully wrap your head around whats on offer here. And what makes this such a remarkable release you should know despite its hefty length its largely good and simply brilliant in parts , a rare beast where quantity also equals quality

This is the Magnum Opus of Merrit and I finally made it through and it was fun to go through very specific music I like it all the way some parts I don’t like so mich but it was ok great album. Really good work.

Now this is something else.
Stephin Merrit really is a productive pop songwriter with a unique sense of sound.
It is irrelevant that the whole pack doesn't really makes for a formidable album.
The amount of good stuff that will inspire you is great.
The lyrics are awesome.
This one you got to listen once in your life at least.

So many styles and so many ways to sing about love. Masterful work by the Fields.

Simply genius. Some might say it has filler, but I always listen to the whole thing - generally in a few sittings!

Who would've thought that the most ambitious album I've ever stumbled upon would be a bunch of love songs...

Long, but it doesn´t feel that long until disc 3.

Your feedback for 69 Love Songs