Enema Of The State (studio album) by Blink-182 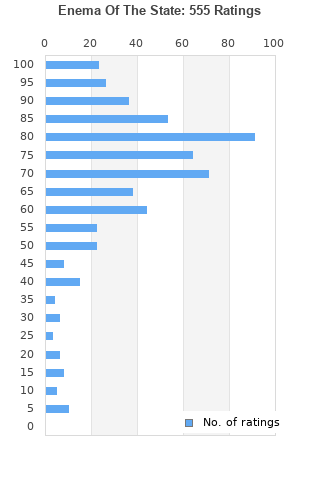 Enema Of The State is ranked as the best album by Blink-182. 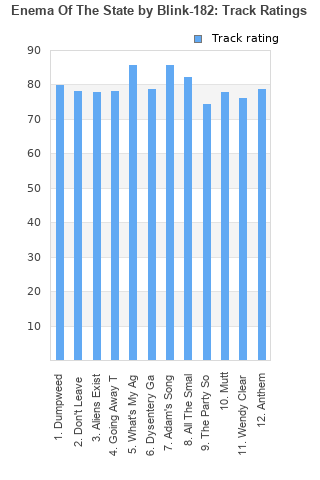 Enema Of The State rankings

Enema Of The State collection

Enema Of The State ratings

Rating metrics: Outliers can be removed when calculating a mean average to dampen the effects of ratings outside the normal distribution. This figure is provided as the trimmed mean. A high standard deviation can be legitimate, but can sometimes indicate 'gaming' is occurring. Consider a simplified example* of an item receiving ratings of 100, 50, & 0. The mean average rating would be 50. However, ratings of 55, 50 & 45 could also result in the same average. The second average might be more trusted because there is more consensus around a particular rating (a lower deviation).
(*In practice, some albums can have several thousand ratings)
This album has a Bayesian average rating of 70.5/100, a mean average of 69.2/100, and a trimmed mean (excluding outliers) of 70.5/100. The standard deviation for this album is 20.7.

Enema Of The State favourites

Enema Of The State comments

Can't get past the first few tracks. The singles are OK though.

Still not enough credit given here, although almost close. I think this should be in the top 300, but I don't know if it'll ever get to that spot just because they were such goofballs and drama queens. I also know most people won't agree with me, but that's OK. Blink was much more creative than people give them credit for, and lets remember they were writing these songs 100% as a band, and outselling the manufactured pop bands, and basically everyone else for about a 4 year stretch. There's genius in the simplicity and quality of every single note, and I think that's what people miss. Being a part of the pop punk genre sure didn't help either. I will continue to fly the flag. 100/100

I quite enjoyed this album - yeah it does sound like edgy boy band punk. Yeah it is simplistic and yeah it is a teen record. So what.

Dislikes: Dumpweed, Going Away to College, The Party Song.

There is nothing terrible about this album but it stays in the same spot of immaturity with shrill vocals and similar song structure.

Lol imagine trying this hard to find this album unappealing and boring.

The first album I ever owned, I don't listen to it as much anymore because as much as I like it for getting me into music, at the end of the day it is a simple pop record.

Fun and catchy teen album. It doesn't have deep lyrics nor ground-breaking music, but it's not like it pretends to be deep.

Hello, mainstream success. Not their best album but definitely their most widely recognized and universally liked

Your feedback for Enema Of The State