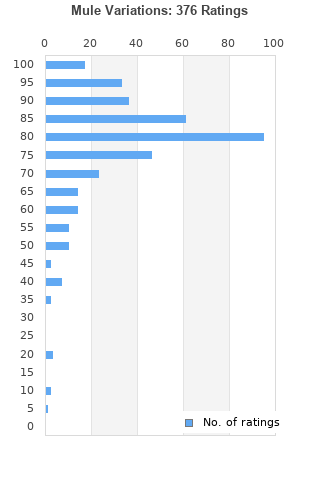 Mule Variations is ranked 5th best out of 26 albums by Tom Waits on BestEverAlbums.com.

The best album by Tom Waits is Rain Dogs which is ranked number 105 in the list of all-time albums with a total rank score of 14,468. 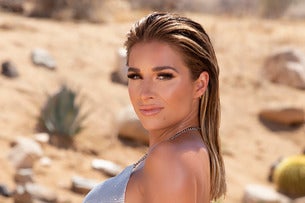 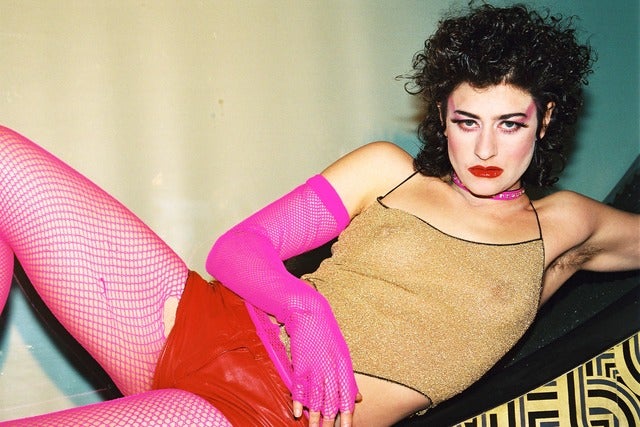 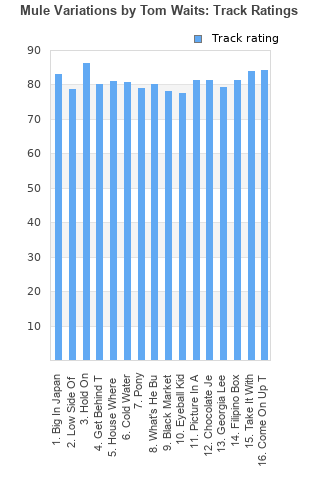 Rating metrics: Outliers can be removed when calculating a mean average to dampen the effects of ratings outside the normal distribution. This figure is provided as the trimmed mean. A high standard deviation can be legitimate, but can sometimes indicate 'gaming' is occurring. Consider a simplified example* of an item receiving ratings of 100, 50, & 0. The mean average rating would be 50. However, ratings of 55, 50 & 45 could also result in the same average. The second average might be more trusted because there is more consensus around a particular rating (a lower deviation).
(*In practice, some albums can have several thousand ratings)
This album is rated in the top 2% of all albums on BestEverAlbums.com. This album has a Bayesian average rating of 78.7/100, a mean average of 77.9/100, and a trimmed mean (excluding outliers) of 78.8/100. The standard deviation for this album is 15.1.

A unique and interesting release from an artist with one of the most consistent discographies in the history of music. This record feels really dark and gritty right from the opening song and it possesses this bluesy feel to it which I love and it really suits his vocal work. He does cross into a few genres on this album and that keeps it enjoyable for the full run time as you never know what your going to get from track to track. It is a bit of an emotional rollercoaster as well and can go from deeply disturbing on What's He Building? to tear jerking on Georgia Lee and you have to admire the quality it takes to do this. His vocal is phenomenal as always and the instrumentation is just as exciting, diverse and experimental as you would expect on a Waits record. To go through every outstanding instrumental performance on this record would take hours so the vital ones that are the most effective and important are the piano, blues harp, bass and all the percussion. Despite this, the one weakness I have with the record is that there are a few filler tracks which does make the record drag for the 70 minute run time. It would be better if it was cut to a 50 minute mark and then it would rival the quality of his better albums. Overall, another elite album by Waits who is on a dark path on this record and he really takes you on this journey with him and we are really blessed to be able to do that.

Now I wasn't a Tom Waits fan. Albums like Rain Dogs put me off of this man. However, this album right here is completely amazing. A mix of folk, muffled rock, beautiful ballads and southern jazz won me over. His voice on this record is husky but also down to earth. Even when the subject matter can be dark. And their is multiple tracks that are just incredible that you can have a fun time but also have songs like House Where Nobody Lives or Georgia Lee that are legitimate tearjerkers. If anybody is having a hard time listening to Tom Waits and think he is weird, listen to this album at least once. You may have the same reaction as me and think this album is amazing. Oh and if people are worried about the length of this album, don't worry it goes by really quickly that you would be surprised that it was 70 minutes long.

It had been six years since Tom Waits' last album when he released, mule variations, in 1999. In a way, it was his most conservative release for a while, although it is difficult to describe an album as conservative when it features songs such as, eyeball kid, and, Filipino box spring hog. Either way, it was still an accessible record by Tom Waits standards. Stii, this didn't detract anything from the music, mule variations, features some of Waits' best writing for years. Opener, big in Japan, is an excellent dirty rock track, and this high quality is consistent through the whole album. From the bluesy, get behind the mule, to the Springsteen-ish, hold on, the beautiful ballad, the house where nobody lives, and the sublime, what's he building, surely Waits' greatest narration track ever. Elsewhere, the high standard continues with, Georgia Lee, pony, take it with me, and the aforementioned, Filipino box spring hog. The LP is actually my joint favourite Tom Waits album with, rain dogs, and catches Tom with arguably his best collection of compositions ever. Fantastic.

Tom Waits is so much fun.

This album was my introduction to Tom Waits. Brilliant. What's he building in there?

The genius of Waits strikes again. This was his best album after a the lull following the mad, raging, brilliant Bone Machine, and is really one of his best. Imagine, for a minute that there had been no Swordfishtrombone, Raindogs, Bone Machine, Black Rider or Frank's Wild Years. Imagine what the response to this album would have been. It would have turned the music world on its head.

The first sound you hear on pressing play is a grinding, grating blues tune with heavily distorted, humorous lyrics. It's hard to distinguish this song from noise. And for a moment, you think this album may be hard to listen to, even for a Tom Waits album. As the first few songs progress, though, something strange begins to unfold. Waits is doing more than entertaining his own love of outcasts. He's doing more than having fun with styles and words.

As others have said, this is incredibly engaging, and I prefer it even to Rain dogs. It invokes such a wide range of moods and emotions....from from the self-deprecating humor of Big in Japan, to the gut-wrenching sentiment of Hold On, to the sheer creepiness of What's He Building....there isn't a bad song on this album.

Your feedback for Mule Variations