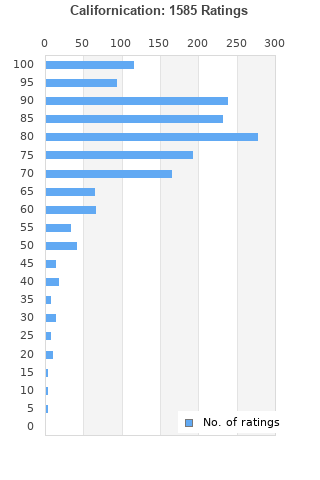 Californication is ranked 2nd best out of 22 albums by Red Hot Chili Peppers on BestEverAlbums.com.

The best album by Red Hot Chili Peppers is Blood Sugar Sex Magik which is ranked number 177 in the list of all-time albums with a total rank score of 9,833. 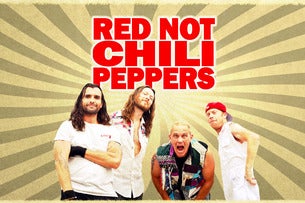 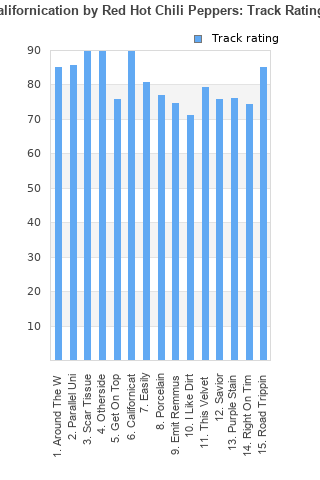 Rating metrics: Outliers can be removed when calculating a mean average to dampen the effects of ratings outside the normal distribution. This figure is provided as the trimmed mean. A high standard deviation can be legitimate, but can sometimes indicate 'gaming' is occurring. Consider a simplified example* of an item receiving ratings of 100, 50, & 0. The mean average rating would be 50. However, ratings of 55, 50 & 45 could also result in the same average. The second average might be more trusted because there is more consensus around a particular rating (a lower deviation).
(*In practice, some albums can have several thousand ratings)
This album is rated in the top 2% of all albums on BestEverAlbums.com. This album has a Bayesian average rating of 79.2/100, a mean average of 77.9/100, and a trimmed mean (excluding outliers) of 79.2/100. The standard deviation for this album is 15.7.

Contains many of their most iconic tracks but slightly marred by length and filler. Easily my favourite RHCP’s album.

Let’s start at the literal beginning. I’ve never listened to this album before and have never previously sought out a RHCP song. Yet I knew, with some pretty solid familiarity, five of the record’s first six songs. Props to terrestrial radio saturation, I guess.

Second, I think the band is tapping into an important theme here. The Hollywood allure and output is damaging to the soul of a nation, but at this point we’re probably too far gone to reverse course.

But…I’m not sure this is the right band to deliver the message. Kiedis’s lyrical style is…jarring? Staccato phrases that give the impression of giving more consideration to the sound of the words than the meaning. “Born in the North and sworn to entertain ya/Cause I’m down for the state of Pennsylvania”

Ultimately, the individual components of the band are pretty stellar but the sum of the parts adds up to something less than what feels possible.

I don't like the mixing and I don't like the compression when its ripped as an audiophile person but the music is fire. Every single song except right on time isn't great. Gong Li and Quixoticelixer are songs that should have made the album. I love this album much for its chord progressions. The melodies are good on songs like Scar Tissue, Otherside and This Velvet Glove. If you want to study melodies as a musician, this album and By The Way, are great places to start

There are some amazing tracks on this album - Californication, Velvet Glove, Otherside. But there are also some annoying ones like Purple Stain and I Like Dirt. Could've been a great album if they had cut out a few of the filler tracks.

Pleasantly surprised at this one! I hadn't liked the other records of theirs that I heard, but there are some great songs here. A little inconsistent as all of their records are, but the highs are pretty great. Also, phenomenal album cover.

Your feedback for Californication