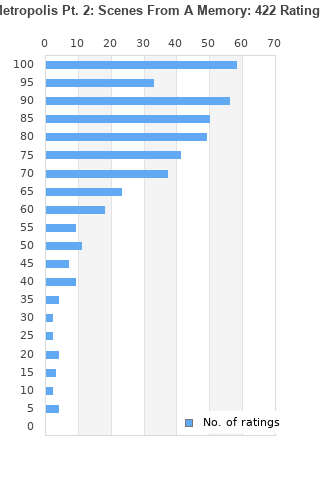 Metropolis Pt. 2: Scenes From A Memory is ranked as the best album by Dream Theater.

Listen to Metropolis Pt. 2: Scenes From A Memory on YouTube 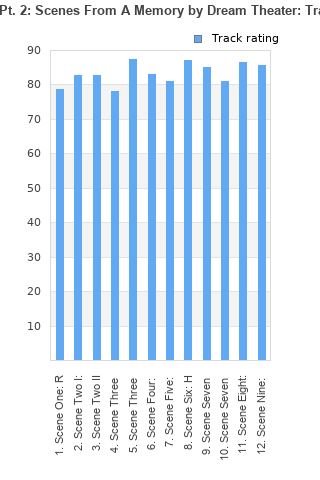 Rating metrics: Outliers can be removed when calculating a mean average to dampen the effects of ratings outside the normal distribution. This figure is provided as the trimmed mean. A high standard deviation can be legitimate, but can sometimes indicate 'gaming' is occurring. Consider a simplified example* of an item receiving ratings of 100, 50, & 0. The mean average rating would be 50. However, ratings of 55, 50 & 45 could also result in the same average. The second average might be more trusted because there is more consensus around a particular rating (a lower deviation).
(*In practice, some albums can have several thousand ratings)
This album is rated in the top 3% of all albums on BestEverAlbums.com. This album has a Bayesian average rating of 78.3/100, a mean average of 76.9/100, and a trimmed mean (excluding outliers) of 78.4/100. The standard deviation for this album is 20.1.

The instrumentation on this album is up to a very high standard and is probably the highlight of it. The story is decent and does allow you to look further into the record but the lyrics are just quite poor in my opinion. There are several times where I cringed whilst listening to this. The vocals aren't the greatest either and the whole tempo of the album feels a little slow. There are songs which are great and I thoroughly enjoy listening to those tracks but the album as a whole just doesn't work for me.

Great album, great storyline even though I didn't quite understood it at first. The musicianship is incredible throughout the record. James Labrie's singing has to be the low point of this album. Best tracks: Through her eyes, the spirit carries on and home.

As a proghead I instinctively like this album, but I agree that it sometimes sounds clichéed and cheesy, not helped by the pretending voice of LaBrie. Instrumentally a really good album though.

This should be much higher, it's barely in the top 500! I don't like the lyrics much, but the story itself is quite good, and boy I'm not even talking about musicianship here. Melodies, rhythms, chord progressions, solos are all out of this world.

Fast forward to February 2018 & I knuckled down and did it , I listened right through every moment twice all 1 hour and 17 minutes of this long album for a 2 hour 34 minute commitment

Firstly this is a very popular album sitting currently 496th over all on BEA , with Rolling Stone awarding it as the best ever Prog Concept Album . Secondly this album tells a convoluted tail of love , murder and regression through the eyes of a character call Nicolas who has apparently lived as a female Victoria in a previous life . So here's a tip before you listen jump on line to read and understand the story before you listen to this album because on my 2 listens I found it impossible to follow via the tracks ( its very confusing )

So is it any good ? Yes and no . The story is slightly interesting even though its a tad cliqued as we've heard it all before through movies and books , the musicianship is first class with ripping guitars , driving drums and an eclectic mix of instruments which includes a Honky Tonk cowboy piano thrown in at one point . There's also some neat story telling props such a cars starting , ice cubes clinking into glass and a creepy Hypnotherapist just to name a few

Lyrically oh boy it sure is cheesy , other BEA users have commented on this and I 100% agree , check this out:
"Wandered through my head / I wept just like a baby/ As I lay awake in bed" (Through Her Eyes)
or
" Feeling good this Friday afternoon / I ran into Julian / Said we'd get together soon " (Finally Free )

A masterpiece it most certainly is not

The lyrics are some of the most cliched I´ve ever heard, and sometimes the music can get so much cheesy. But the out of this world musicians are something to respect.

I consider something perfect, when there is nothing that I want to change about it, no matter how hard I´m looking for it. This album, for my standards, is perfect.

Just a good album. Really like it. After years of listening to this band and then realising that the mostly suck, this is the only album that remains listenable. Some decent riffs and some good writing. Intresting story, but a little like: "OMFG WHAT A FUCKING TRAGEDY JUST LOOK TRAGEDY SADDNESS RESOLUTION I FEEL LOST OMG". You understand me, hopefuly. It can be a little melodramatic, cheesy and predictable, but it's by far the best prog album to come out in the last 2 decades.

When I first heard this album, I didn't find it to be as well put together as their more metal-driven works, like Train of Thought or Systematic Chaos. The strength of this album, surprisingly, lies in it's lyrics. Some may say that they are somewhat underdeveloped, but in the short span they crafted a surprisingly deep story. There are four well developed characters described, as well as the surprising antagonist at the end. It is filled out inbetween with awesome rifts and beautiful ballads, such as 'The Spirit Carries On'.

Your feedback for Metropolis Pt. 2: Scenes From A Memory