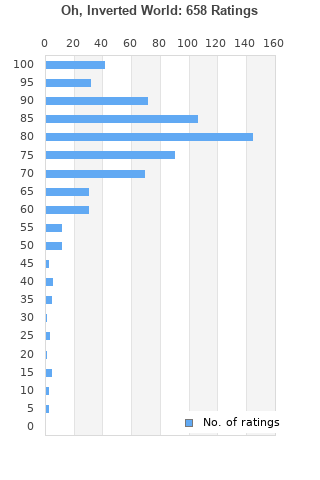 Oh, Inverted World is ranked 2nd best out of 6 albums by The Shins on BestEverAlbums.com.

The best album by The Shins is Chutes Too Narrow which is ranked number 351 in the list of all-time albums with a total rank score of 5,441. 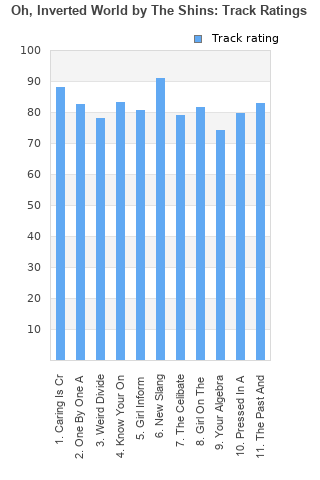 Rating metrics: Outliers can be removed when calculating a mean average to dampen the effects of ratings outside the normal distribution. This figure is provided as the trimmed mean. A high standard deviation can be legitimate, but can sometimes indicate 'gaming' is occurring. Consider a simplified example* of an item receiving ratings of 100, 50, & 0. The mean average rating would be 50. However, ratings of 55, 50 & 45 could also result in the same average. The second average might be more trusted because there is more consensus around a particular rating (a lower deviation).
(*In practice, some albums can have several thousand ratings)
This album is rated in the top 2% of all albums on BestEverAlbums.com. This album has a Bayesian average rating of 78.7/100, a mean average of 77.5/100, and a trimmed mean (excluding outliers) of 78.8/100. The standard deviation for this album is 14.9.

Another lyrical masterclass from a group that do not make a boring album. Every one of their records I have heard so far are quick and consistently brilliant. Every song is snappy and have fantastic choruses and the wordplay and stories on display on such short tracks is mesmerising. The production is a bit rougher on this release but I do think that helps the music at times as it feels more raw and relatable for us. It is very easy to connect with the music and get lost in the genius melodies that are created for us. Overall, this album flies by every time I hear it as it is non stop action and quality and all it is missing is one or two more outstanding tracks and then it would be right up there with Chutes Too Narrow.

I dont like it. It´s poor. Nothing special. Sorry.

Nice lo-fi sound the band never really returned to, with some all-time classic songs. The Shins' best traits have always been excellent melodies and clever lyrics, and these are in spades here. It's a simple, unassuming album, but it is, generally speaking, a great one, with only a few filler tracks (I've never been a huge fan of The Celibate Life or Your Algebra).

I want to credit James Mercer as a master lyricist, interweaving contextual flourishes of wordplay with complex narratives- he makes me think and feel smarter just by listening to his words. Though the production is very indie and less glossy, it gives the raw, though tight, nature of the band boost Mercer's lyrics to the spotlight. This is a landmark indie album not unlike "In The Aeroplane Over The Sea" or "Is This It?" and also proves that Sub-Pop wasn't just a 90s label.

Though "New Slang" is the all-time classic, "Caring is Creepy", "Know Your Onion", "Girl on The Wing", "Pressed in a Book", and "The Celibate Life" are all great. However, it's a relatively short album, just listen to all of them and pray that they provide the soundtrack to your Wes Anderson-themed twee dreams!

Very twee! Are you sure this wasn't released in the sixties?

Unlike many, I didn't discover The Shins through the movie Garden State and the song from that movie soundtrack, New Slang (it will 'change your life' and all that). I was initially blown away by their second album Chutes To Narrow which led me on to this other excellent album of theirs. Like Chutes, there isn't a bad tune here. It's understated production makes it less glossy in sound but a bit more cred as an indie classic. And while New Slang won't necessarily change your life, it will give you a satisfied smile which is just as important sometimes.

Caring Is Creepy and New Slang are really good.

Loving Chutes Too Narrow I went back and checked this one out and it’s great. Well worth your time.

Great album. Full of good songs like Pressed in a Book, Girl Inform Me, Know Your Onion, and the rest. I probably like Chutes Too Narrow a little better, but this is a close second

Just kidding this is pretty good.

Your feedback for Oh, Inverted World