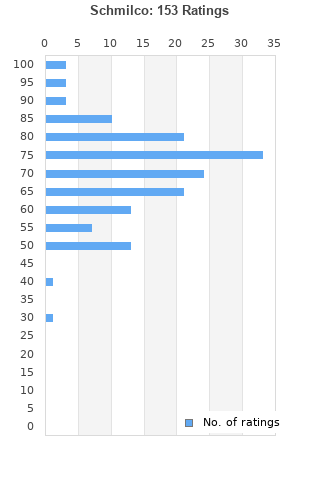 Wilco - Schmilco [New CD]
Condition: Brand New
Time left: 19h 2m 24s
Ships to: Worldwide
$15.77
Go to store
Product prices and availability are accurate as of the date indicated and are subject to change. Any price and availability information displayed on the linked website at the time of purchase will apply to the purchase of this product.  See full search results on eBay

Schmilco is ranked 8th best out of 16 albums by Wilco on BestEverAlbums.com.

The best album by Wilco is Yankee Hotel Foxtrot which is ranked number 45 in the list of all-time albums with a total rank score of 28,139. 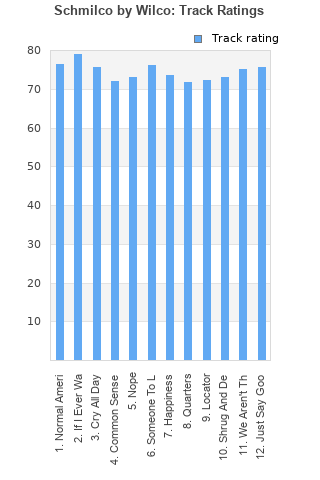 Rating metrics: Outliers can be removed when calculating a mean average to dampen the effects of ratings outside the normal distribution. This figure is provided as the trimmed mean. A high standard deviation can be legitimate, but can sometimes indicate 'gaming' is occurring. Consider a simplified example* of an item receiving ratings of 100, 50, & 0. The mean average rating would be 50. However, ratings of 55, 50 & 45 could also result in the same average. The second average might be more trusted because there is more consensus around a particular rating (a lower deviation).
(*In practice, some albums can have several thousand ratings)
This album has a mean average rating of 71.0/100. The trimmed mean (excluding outliers) is 70.9/100. The standard deviation for this album is 11.6.

The first time I listened to this I thought it was so boring. I didn't listen to it again for another two years. Then I gave it another spin and I liked it. At this point I absolutely love it, probably my second favorite album of their's behind Yankee. It's not experimental or groundbreaking or whatnot but the songs really speak to me. If you like this, definitely check out Tweedy's solo albums Warm and Warmer which are similar and also excellent.

best tracks: if i ever was a child, normal american kids

I prefer Wilco when they're at their querkiest, so this album is a good one for me. It's pretty new and I expect will soon go up the Wilco album mini chart

nothing WOW! but, not bad...just regular good wilco album...

I have the same problem with this albums like I have with Star Wars. It doesn't feel like a real Wilco-album. Both albums feel like some songs from a demo tape. It's a nice compilation of songs that didn't fit on the regular albums. This a not the visonary songs that made Wilco great.
It feels like The Whole Love is the last regular album from Wilco. Still I hope that they will release some more

Wilco being Wilco which is never a bad thing, although I feel like there's a slight decline in the quality of their lyricism.

It's too safe, but its still good.