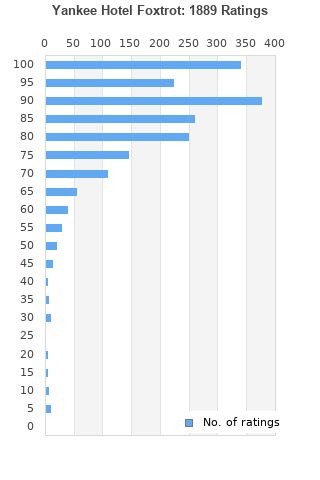 Dr Dog - Live At A Flamingo Hotel (New Vinyl LP) (for fans of Wilco)
Condition: New
Time left: 5h 14m 51s
Ships to: Worldwide
£10.00
Go to store
Product prices and availability are accurate as of the date indicated and are subject to change. Any price and availability information displayed on the linked website at the time of purchase will apply to the purchase of this product.  See full search results on eBay

Yankee Hotel Foxtrot is ranked as the best album by Wilco. 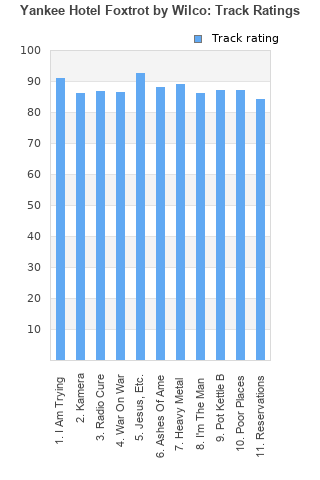 Rating metrics: Outliers can be removed when calculating a mean average to dampen the effects of ratings outside the normal distribution. This figure is provided as the trimmed mean. A high standard deviation can be legitimate, but can sometimes indicate 'gaming' is occurring. Consider a simplified example* of an item receiving ratings of 100, 50, & 0. The mean average rating would be 50. However, ratings of 55, 50 & 45 could also result in the same average. The second average might be more trusted because there is more consensus around a particular rating (a lower deviation).
(*In practice, some albums can have several thousand ratings)
This album is rated in the top 1% of all albums on BestEverAlbums.com. This album has a Bayesian average rating of 85.4/100, a mean average of 84.2/100, and a trimmed mean (excluding outliers) of 85.4/100. The standard deviation for this album is 15.1.

I'll always remember watching the 'I Am Trying to Break Your Heart' documentary, then listening to the album again. And when it finally clicked with me, it instantly became one of the most powerful listening experiences I've ever had.

I can hear why people like Wilco, but I only really enjoyed half of these songs.

Most songs are good. The problem is the lack of a great classic song that make this album one of the top 3 best of the 2000s. Where is it? I like the whole vibe of the record. But is not better than A Rush Of Blood To The Head, and is still above it.

For me, Ode to joy is a better album then this one. Still, great music!

Fav. Tracks, I Am Trying To Break Your Heart & Jesus, Etc.

This is a good album, but I really don’t get the hype. I wouldn’t even put it in the top 5 Wilco albums. I’ve listened to it at least ten times between the time it was released to now, hoping it will click, but it just falls flat for me. Some interesting experimentation, but the chord progressions and vocals just feel lazy to me. I know I’m gonna be grilled for this.

Extremely touching and lyrically interconnected. Sometimes I think communication is the only important thing and, as Wilco makes painfully apparent, very difficult.

Your feedback for Yankee Hotel Foxtrot