Where Did The Night Fall (studio album) by Unkle 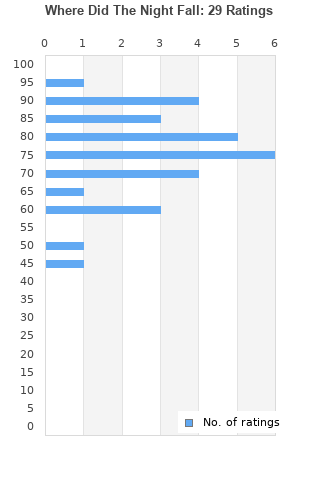 Where Did The Night Fall is ranked 2nd best out of 11 albums by Unkle on BestEverAlbums.com.

The best album by Unkle is Psyence Fiction which is ranked number 2782 in the list of all-time albums with a total rank score of 560.

Listen to Where Did The Night Fall on YouTube 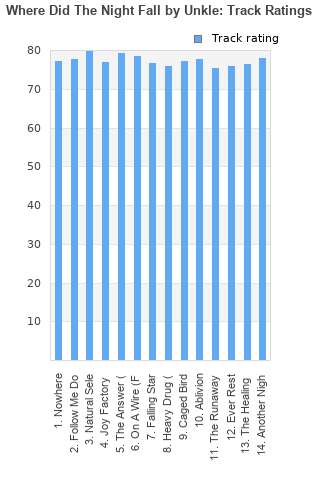 Where Did The Night Fall rankings

Where Did The Night Fall collection

Where Did The Night Fall ratings

Rating metrics: Outliers can be removed when calculating a mean average to dampen the effects of ratings outside the normal distribution. This figure is provided as the trimmed mean. A high standard deviation can be legitimate, but can sometimes indicate 'gaming' is occurring. Consider a simplified example* of an item receiving ratings of 100, 50, & 0. The mean average rating would be 50. However, ratings of 55, 50 & 45 could also result in the same average. The second average might be more trusted because there is more consensus around a particular rating (a lower deviation).
(*In practice, some albums can have several thousand ratings)
This album is rated in the top 10% of all albums on BestEverAlbums.com. This album has a Bayesian average rating of 75.4/100, a mean average of 76.3/100, and a trimmed mean (excluding outliers) of 76.3/100. The standard deviation for this album is 11.3.

Where Did The Night Fall favourites

Where Did The Night Fall comments

More upbeat disposition than the previous decades dystopian sounding albums. The variety of guest vocalists is great giving a varied sound yet still keeping along the same theme overall, (Mark Lanegan my favorite of these). Final few songs ending the album with some fantastic serenity.

More great sounds, and some good collaborations. Natural Selection is my favourite on the album

Super cool! Now here's an artist I need to revisit more often. He has such a cool sound.

Your feedback for Where Did The Night Fall