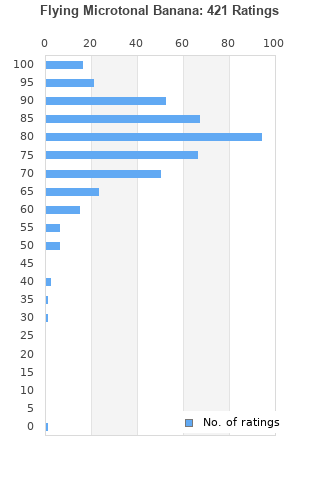 King Gizzard & Lizard Wizard - Flying Microtonal Banana Radioactive Yellow Vinyl
Condition: New
Time left: 3d 19h 52m 16s
Ships to: Worldwide
$39.99
Go to store
Product prices and availability are accurate as of the date indicated and are subject to change. Any price and availability information displayed on the linked website at the time of purchase will apply to the purchase of this product.  See full search results on eBay

Flying Microtonal Banana is ranked 2nd best out of 23 albums by King Gizzard & The Lizard Wizard on BestEverAlbums.com.

The best album by King Gizzard & The Lizard Wizard is Nonagon Infinity which is ranked number 728 in the list of all-time albums with a total rank score of 2,609. 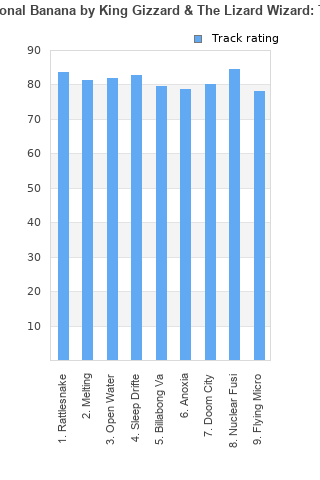 Rating metrics: Outliers can be removed when calculating a mean average to dampen the effects of ratings outside the normal distribution. This figure is provided as the trimmed mean. A high standard deviation can be legitimate, but can sometimes indicate 'gaming' is occurring. Consider a simplified example* of an item receiving ratings of 100, 50, & 0. The mean average rating would be 50. However, ratings of 55, 50 & 45 could also result in the same average. The second average might be more trusted because there is more consensus around a particular rating (a lower deviation).
(*In practice, some albums can have several thousand ratings)
This album is rated in the top 3% of all albums on BestEverAlbums.com. This album has a Bayesian average rating of 78.7/100, a mean average of 78.1/100, and a trimmed mean (excluding outliers) of 78.9/100. The standard deviation for this album is 12.0.

Amon dull? Hopefully young people will get to Neu and Amon Duul through these guys and realize this is pretty banal retro rock.

Absolutely amazing album, unlike anything I have ever heard. Will definitely find its way onto my chart.

Another beautiful concept from the Psych Rock geniuses. The addition of microtones feels so incredibly natural in their already winning formula, whilst the subtle mystery and darkness within the instrumentation creates a stunning atmosphere. Definitely their best album to date.

I love this album. I was obsessed with King Gizzard for a while and this was the only album I could get my hands on at the time. It sat in my car for a good month and was the only thing I listened to. The microtonality might be hard to get used to at first, but give it a chance, it will blow your mind. Maybe... no guarantees. Billabong Valley and Open Water are two of my favorites and Nuclear Fusion is one of the band's best songs.

Really a renovation of modern music. Nothing I heard before. So original Sound.

First King Gizzard album I've listened to. Although not entirely my cup of tea I respect the talent at work. Definitely one of the more unique, fascinating and weird listening experiences I've had in a while. Absolutely will listen to more of these guys!

There are some highlights in here such as Sleep Drifter or Nuclear Fusion, but overall, not one of King Gizzard best albums.

Like nothing I've ever heard before - completely original and fantastic. It was a wonderful idea to include microtonal tuning in each track, and the end result certainly did not disappoint! I'd recommend giving the album a few listens and allowing yourself time to absorb it fully before rating it.

Pretty aimless, but weirdly hypnotic. I enjoy it.

Your feedback for Flying Microtonal Banana