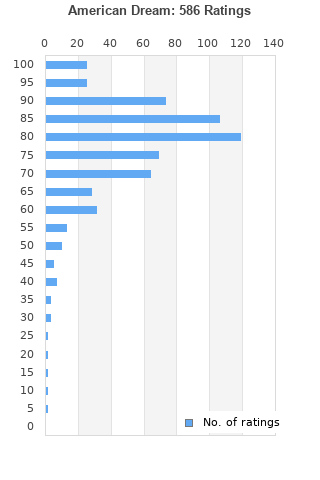 LCD Soundsystem - American Dream (2017) Cassette Tape
Condition: Brand New
Time left: 19h 21m 32s
Ships to: Worldwide
$14.00
Go to store
Product prices and availability are accurate as of the date indicated and are subject to change. Any price and availability information displayed on the linked website at the time of purchase will apply to the purchase of this product.  See full search results on eBay

American Dream is ranked 3rd best out of 8 albums by LCD Soundsystem on BestEverAlbums.com.

The best album by LCD Soundsystem is Sound Of Silver which is ranked number 91 in the list of all-time albums with a total rank score of 16,808. 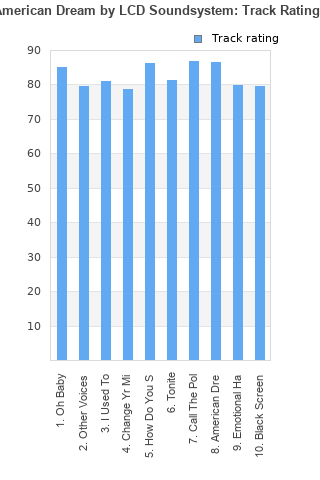 Rating metrics: Outliers can be removed when calculating a mean average to dampen the effects of ratings outside the normal distribution. This figure is provided as the trimmed mean. A high standard deviation can be legitimate, but can sometimes indicate 'gaming' is occurring. Consider a simplified example* of an item receiving ratings of 100, 50, & 0. The mean average rating would be 50. However, ratings of 55, 50 & 45 could also result in the same average. The second average might be more trusted because there is more consensus around a particular rating (a lower deviation).
(*In practice, some albums can have several thousand ratings)
This album is rated in the top 3% of all albums on BestEverAlbums.com. This album has a Bayesian average rating of 78.1/100, a mean average of 77.3/100, and a trimmed mean (excluding outliers) of 78.2/100. The standard deviation for this album is 14.3.

Call The Police
How Do You Sleep?
Oh Baby
Other Voices

Very solid album of theirs and a welcome comeback for a great band. The material on here is probably the most meditative of their discography, with themes of aging, detachment, and putting the past behind you. James Murphy sounds the most vulnerable here, making him sound extremely honest and down to earth. He also doesn't have as much of those great dance beats to use as a sort of crutch to cope with his aging, adding to the themes of the album.

It's definitely not on the level of Sound of Silver and This is Happening, but it's very reliable and very 80s influenced.

Awesome album and a worthy return by LCD Soundsystem.

I was not very impressed by their dance albums, and in late 2017, the year that I started following new releases, "american dream" came as a surprise for this band that I was indiferent towards.

This album doesn't really feel like an LCD soundsystem album, It is a completely diferent vibe. So I get why older fans doesn't dig up this. But for me It was the only side of LCD Soundsystem that I could possible enjoy. "Oh Baby" is one of my favorite songs of this decade.

Absolutely incredible album. Just like all of James' work it wears its influences on its sleeve and the end result is a masterful blend of dance-punk, post-punk and prog rock. Each of these tracks is capable of hitting the listener hard lyrically and the collective rush of us against time is shown from every angle here: the rage, the nostalgia, the resentfulness and the urge to make each day count are all discussed in a personally affected manner which doesn't isolate the listener. One of the few albums I've ever heard that had an actual personal impact on me.

This album has grown on me a lot. It's not quite as strong as some of LCD's other work and it runs a little long. However, LCD Soundsystem has such a great sound and style to their music. The standout tracks for me are Oh Baby, Call the Police, and American Dream.

'I'm counting on this to be album of the year... and by the sounds of Call the Police, it just might be.'

I wrote that comment back in August just before this album came out... and I couldn't have been more wrong

Having said that, How Do You Sleep? is quite possibly one of their best songs

Despite the critical acclaim I didn’t dig this album too much. For starters it’s too, no , WAY too long at a ridiculous 82 minutes

The first couple of tracks are ok but from here on it gets quite sameness/ ish . Even the track ‘ American Dream ‘ I couldn’t get into

Your feedback for American Dream