A Deeper Understanding (studio album) by The War On Drugs 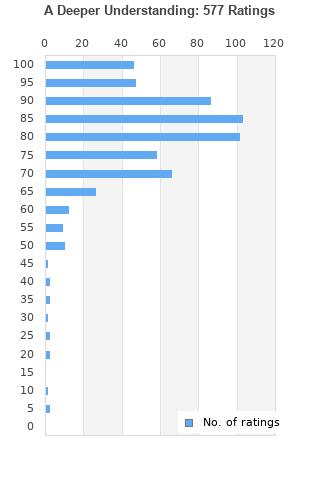 A Deeper Understanding is ranked 2nd best out of 7 albums by The War On Drugs on BestEverAlbums.com.

The best album by The War On Drugs is Lost In The Dream which is ranked number 161 in the list of all-time albums with a total rank score of 10,794. 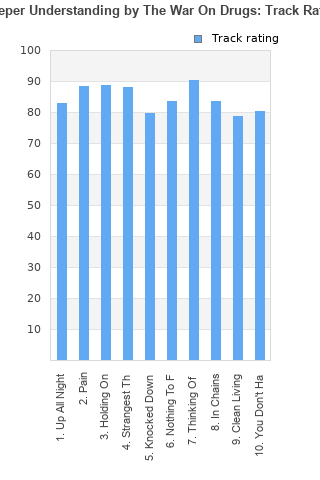 Rating metrics: Outliers can be removed when calculating a mean average to dampen the effects of ratings outside the normal distribution. This figure is provided as the trimmed mean. A high standard deviation can be legitimate, but can sometimes indicate 'gaming' is occurring. Consider a simplified example* of an item receiving ratings of 100, 50, & 0. The mean average rating would be 50. However, ratings of 55, 50 & 45 could also result in the same average. The second average might be more trusted because there is more consensus around a particular rating (a lower deviation).
(*In practice, some albums can have several thousand ratings)
This album is rated in the top 1% of all albums on BestEverAlbums.com. This album has a Bayesian average rating of 81.3/100, a mean average of 80.3/100, and a trimmed mean (excluding outliers) of 81.4/100. The standard deviation for this album is 14.0.

The best thing about this album is how the artist gives every song its own limelight and its own space to breathe. Every track is allowed to run its course and finish where it is supposed to finish. The run times are just perfect. It is on albums like these that you realise how amazing music can be when you allow it to be free. This is best displayed on Thinking Of A Place. Every song matches the same tone and atmosphere and it creates this mellow and chill vibe throughout. The lyrics are fantastic and well worth delving into as well. However, some cuts are a little weaker, they are still enjoyable but are closer to filler than the quality of the other tracks. Overall, a fantastic album from a very consistent artist.

The best, an album following up a magnum opus, can hope for is to gain at least a small faction of listeners who would sincerely claim its the better album. And in that sense, A Deeper Understanding did all that and then some. My personal favourite and a timeless modern classic.

Somehow sounds like a cross between Bryan Adams, Dire Straits, Bruce Springsteen and Don Henley. But without any of the biting lyricism that made some of them stand out. It all just kind of glides by inoffensively. Which is great if that's what you're into.

Also - is the song 'In Chains' meant to sound so much like 'Red Eyes' crossed with 'Under the Pressure'?

They actually topped their last album... Cannot believe it... Some songs still two years after hearing them are still growing like baby mushrooms into full grown beautiful pineapples. Thats a special and unique gift this album has to offer. It is literally impossible for them to improve even higher.

Somewhere, maybe on someone's chart, I saw a comment saying that The War on Drugs is a band that appeals to the "bridge and tunnel crowd." I had to Google the phrase to find out what it means; apparently it's a term of condescension applied by New Yorkers to folks who commute into the city from New Jersey and elsewhere. The implication, I suppose, is that such people have gauche, unrefined musical tastes. Well, I live in Montana, and whatever it may say about me, I love The War on Drugs. A Deeper Understanding is an aptly titled album, as I think it far surpasses their previous albums (which I also liked) in consistency and emotional depth. I love the spaciousness of the production on this album, and I love the way these songs breathe. "Strangest Thing" is a slow burner that lumbers out the gate full of portent and, over the course of its eleven-minute runtime, expertly dials up the drama, with Wurlitzer organs and a wall of synths leading to a booming finale.

ADU is my favorite War On Drugs album. It feels like a continuation of LITD, but with a more rough sound, somestimes saturated. And always the aerial vibes from the previous one. The band has had a great impact in my life. Can't wait for more.

Beautiful sounds. "Holding On" is my absolute favorite. But there is no song, that is not exceptional well written. The whole album takes you on a journey, where you can travel in your head and feel whatever you want to feel. Very impressive song writing.

Didn't realise I'd commented on this. Ha, yep, he has a voice like Bryan Adams mixed with Dylan. I heard "pain" playing when was shopping, thought it was these and kind of liked it, nice guitar but maybe not really my thing. The album is ok I guess. Bland but ok. A couple of good tracks but just like when I saw them live at a festival it's all just ho hum.

Your feedback for A Deeper Understanding