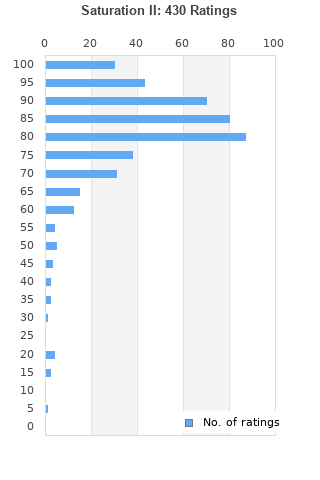 Saturation II is ranked 2nd best out of 8 albums by Brockhampton on BestEverAlbums.com.

The best album by Brockhampton is Saturation III which is ranked number 820 in the list of all-time albums with a total rank score of 2,288. 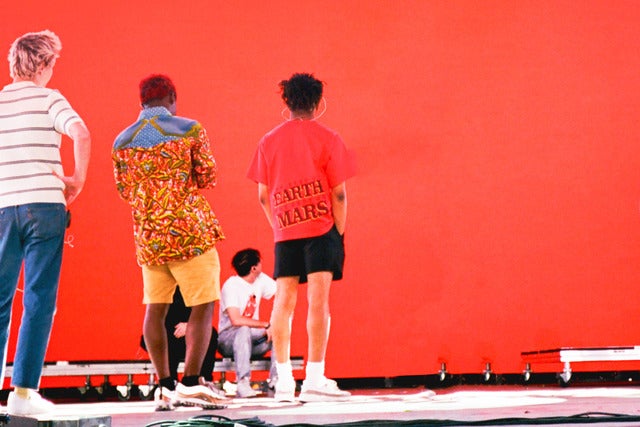 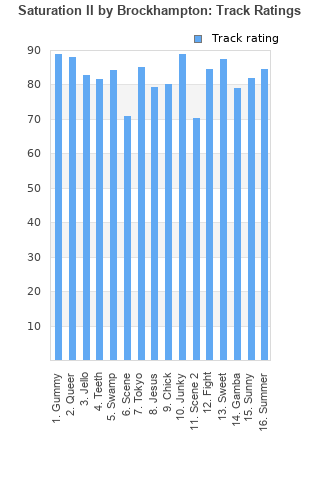 Rating metrics: Outliers can be removed when calculating a mean average to dampen the effects of ratings outside the normal distribution. This figure is provided as the trimmed mean. A high standard deviation can be legitimate, but can sometimes indicate 'gaming' is occurring. Consider a simplified example* of an item receiving ratings of 100, 50, & 0. The mean average rating would be 50. However, ratings of 55, 50 & 45 could also result in the same average. The second average might be more trusted because there is more consensus around a particular rating (a lower deviation).
(*In practice, some albums can have several thousand ratings)
This album is rated in the top 1% of all albums on BestEverAlbums.com. This album has a Bayesian average rating of 82.0/100, a mean average of 81.0/100, and a trimmed mean (excluding outliers) of 82.2/100. The standard deviation for this album is 14.2.

Saturation II has a lot of ideas and talent on it. Each member of the group has a distinct personality and set of ideals. Unfortunately, it feels like they haven't figured out how to cleanly meld them together yet. There are abrupt changes in the style of music during and between tracks. Lyrically can can also be uneven between verses.

Wayyy better than the first one

Although I agree this is probaly the weakest album of the trilogy I still think It is great. Again, there is something about Brockhampton that just smells classic.

With this sequel, the boys outdid themselves.

I agree, I think this is the weakest of the trilogy, but there's no shame in that. It's still a great album.

This is a great album, but I and III are clearly better than this one. With that said, SWEET is my favorite Brockhampton song out of all of 2017, which belongs to this record.

My favorite of the three. They get better with every release. Check out the songs Swamp, Tokyo, Sweet, Sunny, & Summer

I prefer the first record, but this is still a really strong, sharp piece of work with some great tracks. Brockhampton are on a roll

Better than the first one

Your feedback for Saturation II