Stranger In The Alps (studio album) by Phoebe Bridgers 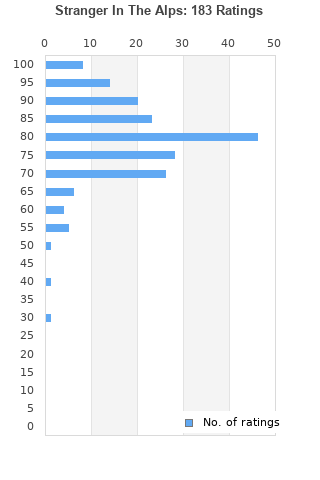 Stranger In The Alps is ranked 2nd best out of 2 albums by Phoebe Bridgers on BestEverAlbums.com.

The best album by Phoebe Bridgers is Punisher which is ranked number 789 in the list of all-time albums with a total rank score of 2,346. 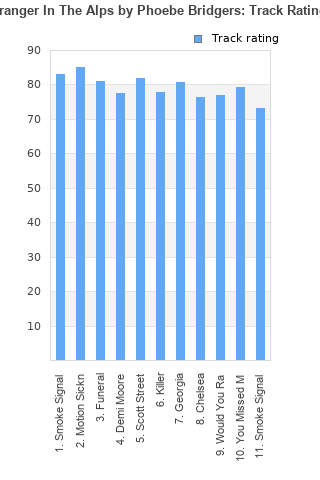 Stranger In The Alps rankings

Stranger In The Alps collection

Stranger In The Alps ratings

Rating metrics: Outliers can be removed when calculating a mean average to dampen the effects of ratings outside the normal distribution. This figure is provided as the trimmed mean. A high standard deviation can be legitimate, but can sometimes indicate 'gaming' is occurring. Consider a simplified example* of an item receiving ratings of 100, 50, & 0. The mean average rating would be 50. However, ratings of 55, 50 & 45 could also result in the same average. The second average might be more trusted because there is more consensus around a particular rating (a lower deviation).
(*In practice, some albums can have several thousand ratings)
This album is rated in the top 2% of all albums on BestEverAlbums.com. This album has a Bayesian average rating of 79.6/100, a mean average of 79.5/100, and a trimmed mean (excluding outliers) of 80.1/100. The standard deviation for this album is 11.1.

Stranger In The Alps favourites

Stranger In The Alps comments

The first 3 tracks are pure brilliance and are beautifully paced and wonderfully crafted. Those 3 songs really demonstrate the potential the artist has for the future and it makes me excited for future projects. The atmosphere maintained throughout as well is dark and unsettling and creates a brilliant melancholic vibe that engulfs you for the full run time. However, this record does have a few issues with there being no real great standout tracks after the first 3 songs and I do start to lose interest around the halfway mark. Overall, this record is a great start and a great place to begin a career.

One of the best indie folk albums of the decade

Her potential is infinite. There are one or two songs I could do without, but overall this is a hauntingly beautiful album. Standouts tracks include Scott Street, Motion Sickness, and Smoke Signals. With the boygenius EP being another home run, it's exciting to think of where her career is heading.

So many killer tracks here: the haunting opener "Smoke Signals" , the single "Motion Sickness" with its incredible video , "Georgia" which is album highlight & was written originally by a teenage Bridges and the beautiful duet "Would You Rather"

The albums not perfect though with "You Missed My Heart" not working as an album closer , but it really is the only chink in a stunning armour

Haunting. Every play brings something new. Loving it more and more.

Some great moments in here, but overall it isn't that good. 7/10.

This is so good. I love it - with the 1-2 punch of the twin-peaks guitar in Smoke Signals and the uptempo break-up classic of Motion Sickness, it's an instant delight that never really lets up.

Your feedback for Stranger In The Alps