Teaser And The Firecat (studio album) by Cat Stevens 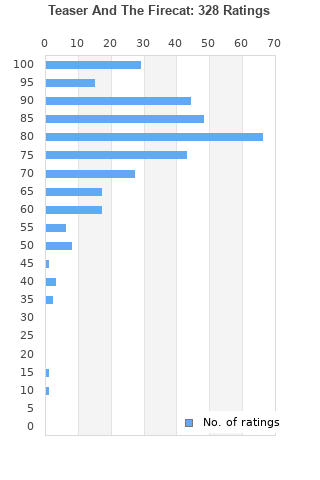 Cat Stevens: Teaser And The Firecat NEW 2CD - Released 12/11/2021
Condition: Brand New
Time left: 2h 6m 40s
Ships to: Worldwide
£16.99
Go to store
Product prices and availability are accurate as of the date indicated and are subject to change. Any price and availability information displayed on the linked website at the time of purchase will apply to the purchase of this product.  See full search results on eBay

Teaser And The Firecat is ranked 2nd best out of 19 albums by Cat Stevens on BestEverAlbums.com.

The best album by Cat Stevens is Tea For The Tillerman which is ranked number 481 in the list of all-time albums with a total rank score of 3,939. 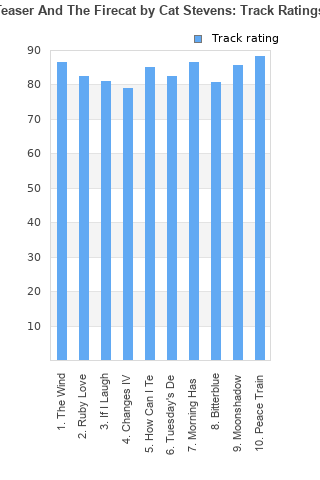 Teaser And The Firecat rankings

Teaser And The Firecat collection

Teaser And The Firecat ratings

Rating metrics: Outliers can be removed when calculating a mean average to dampen the effects of ratings outside the normal distribution. This figure is provided as the trimmed mean. A high standard deviation can be legitimate, but can sometimes indicate 'gaming' is occurring. Consider a simplified example* of an item receiving ratings of 100, 50, & 0. The mean average rating would be 50. However, ratings of 55, 50 & 45 could also result in the same average. The second average might be more trusted because there is more consensus around a particular rating (a lower deviation).
(*In practice, some albums can have several thousand ratings)
This album is rated in the top 2% of all albums on BestEverAlbums.com. This album has a Bayesian average rating of 79.6/100, a mean average of 79.1/100, and a trimmed mean (excluding outliers) of 79.8/100. The standard deviation for this album is 14.2.

Teaser And The Firecat favourites

Teaser And The Firecat comments

A fantastic album that is definitely up there with Tillerman for his best work. Every song is short and sweet and packs a punch considering the small amount of time we are listening to them. The vocal delivery is outstanding and his voice is very unique. The lyrics are also very smart as well such as on tracks like Peace Train. Some songs do dip in quality though and the instrumentation can be repetitive and similar. On the whole, it is short but brilliant.

Cat's best album. Half of the LP is still played on the radio daily almost 50 years later. Peace Train, Morning Has Broken and Moonshadow are iconic songs of the 70s still known in most households today, and for Cat fans songs like How Can I Tell You (one of the greatest love songs goin round) and The Wind are common favorites. The Wind has become more appreciated since appearing in movies such as Almost Famous and Wes Anderson's Rushmore, both in powerful moments. Tuesday's Dead has profound but mysterious lyrics that fans are still unpacking and analyzing today. Definitely a defining moment for Cat, and for the 70s in general.

Difficult to say which is better: Teaser or Tillerman. Both are amazing albums

Great album. While it is no Tea... Stevens' voice and songwriting are still incredible. "Peace Train" is my favorite track.

Lovely voice and great songwriting! Could be a real winner in a few more listens.

Moonshadow is my fav track

Your feedback for Teaser And The Firecat