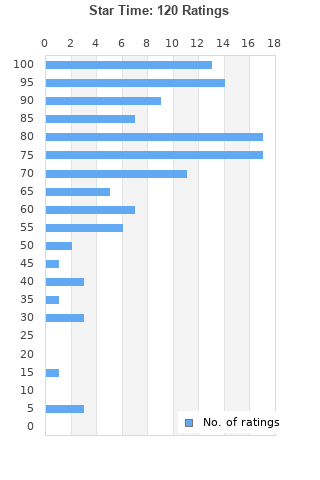 Star Time is ranked 5th best out of 83 albums by James Brown on BestEverAlbums.com.

The best album by James Brown is Live At The Apollo which is ranked number 655 in the list of all-time albums with a total rank score of 2,848. 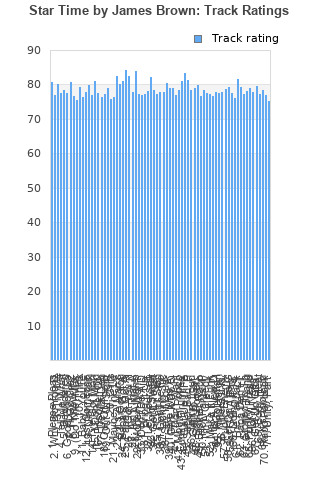 Rating metrics: Outliers can be removed when calculating a mean average to dampen the effects of ratings outside the normal distribution. This figure is provided as the trimmed mean. A high standard deviation can be legitimate, but can sometimes indicate 'gaming' is occurring. Consider a simplified example* of an item receiving ratings of 100, 50, & 0. The mean average rating would be 50. However, ratings of 55, 50 & 45 could also result in the same average. The second average might be more trusted because there is more consensus around a particular rating (a lower deviation).
(*In practice, some albums can have several thousand ratings)
This album is rated in the top 8% of all albums on BestEverAlbums.com. This album has a Bayesian average rating of 76.0/100, a mean average of 74.5/100, and a trimmed mean (excluding outliers) of 76.3/100. The standard deviation for this album is 21.2.

Hard to rate in the context of regular albums, but outstanding, even amongst box sets.

I was not disappointed, I like this collection of great music. Must have from James Brown with Live At Apollo.

The greatest single collection of JB, the greatest and most influential R&B artist in history, and the inventor of funk. The only downside is that it came out when CDs didn't sound quite as good as they did a few years later, so there are later less comprehensive compilations with slightly better sound (not that the sound is bad; Polygram was generally the best of the major labels back then). There are great live albums, and, for JB fanatics, there are deep cuts not on here, but for most people this collection is all you need.

What an amazing career.

Your feedback for Star Time