The Kink Kontroversy (studio album) by The Kinks 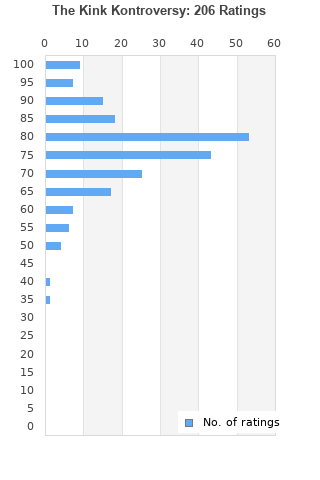 The Kinks - Kink Kontroversy [New CD] UK - Import
Condition: Brand New
Time left: 3h 47m 26s
Ships to: Worldwide
$22.95
Go to store
Product prices and availability are accurate as of the date indicated and are subject to change. Any price and availability information displayed on the linked website at the time of purchase will apply to the purchase of this product.  See full search results on eBay

The Kink Kontroversy is ranked 8th best out of 53 albums by The Kinks on BestEverAlbums.com.

The best album by The Kinks is The Kinks Are The Village Green Preservation Society which is ranked number 163 in the list of all-time albums with a total rank score of 11,098. 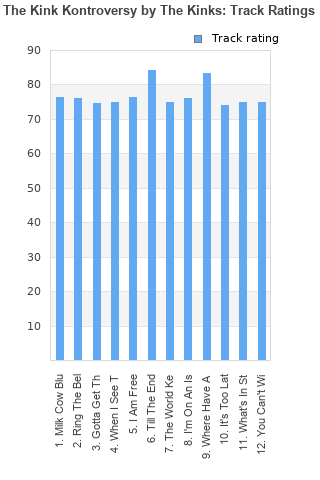 Rating metrics: Outliers can be removed when calculating a mean average to dampen the effects of ratings outside the normal distribution. This figure is provided as the trimmed mean. A high standard deviation can be legitimate, but can sometimes indicate 'gaming' is occurring. Consider a simplified example* of an item receiving ratings of 100, 50, & 0. The mean average rating would be 50. However, ratings of 55, 50 & 45 could also result in the same average. The second average might be more trusted because there is more consensus around a particular rating (a lower deviation).
(*In practice, some albums can have several thousand ratings)
This album is rated in the top 3% of all albums on BestEverAlbums.com. This album has a Bayesian average rating of 77.9/100, a mean average of 77.7/100, and a trimmed mean (excluding outliers) of 78.1/100. The standard deviation for this album is 11.1.

This album has a few classic kinks songs and then the rest is just there to fill the rest of the time out. None of the other songs have those catchy, infectious choruses and just lack the usual kinks energy that will come on later albums. You can see the potential on the record though and so it is quite an important album to listen to as u can see the progression of the band. However, it won't challenge their greatest ever albums for the top spot and didn't really captivate me too much.

Much better album than the last two, although the second half lags a bit, bringing it down overall in quality.

Best Tracks: I Am Free, Where Have All The Good Times Gone

Best tracks: I'm On An Island, Where Have All The Good Times Gone and I am free. The rest are nothing to remember.
Next album would be a great step and Kink's first really good album.

The Kink Kontroversy, wraps up phase one of The Kinks. Much like the two preceding albums, Kontroversy, features a couple of cracking songs and then it's padded out with filler. There are eleven originals here, ten from Ray, one from Dave, and one last rock'n'roll cover, milk cow blues. Best songs without a doubt are, til the end of the day, and, where have all the good times gone, the rest is just about ok. So, that's the first chapter over, next time the band would finally deliver on the album front.

Best Track: Where Have All The Good Times Gone

The Kinks' classic 1965 album "The Kink Kontroversy" has now also been released in a deluxe edition. The original mono album comprises CD 1 while CD 2 is an exciting mix of singles, demos, outtakes and BBC liverecordings.

The original album ought not require a detailed presentation, one can only affirm that it is one of the most important early Kinks albums; not least because of strong songs like "To the End of The Day", "I'm on an Island, "Where Have All The Good Times Gone" and "Ring the Bells"

The same raw unpolished sound that characterizes the album is present on the contemporary single-tracks "Dedicated Follwer of Fashion," "Sitting On My Sofa" and "I'm Not Like Everubody Else" - all three well-known Kinks classics which are all included on CD 2 .

"Mr. Reporter" was at a certain point considered for Dave Davies never released solo album, but here you have a fine version with Ray Davies as lead singer.

Alternative versions of "Dedicated Follwer of Fashion" and "I'm Not Like Everybody Else" are found too - especially the former is very interesting.

"Time Will Tell" is a nice out-take, which probably never got the final touch - could easily have fitted the original album.

"And I Will Love You" is an unreleased EP number, which also sounds a little unfinished and sonically more would fit into "Kinda Kinks"

"All Night Stand" is a demo of a fine little song that was never used for any release.

Second half of the CD are BBC liverecordings, of which two have not been previously released.

All in all a nice release, where the sound is definitely better than on most previously issued CD versions of the album.

Kinks were sticking with their initial sound - this is not as fresh as The Kinks, and isn't as creative as their late 60s work. An easily overlooked album.

Your feedback for The Kink Kontroversy