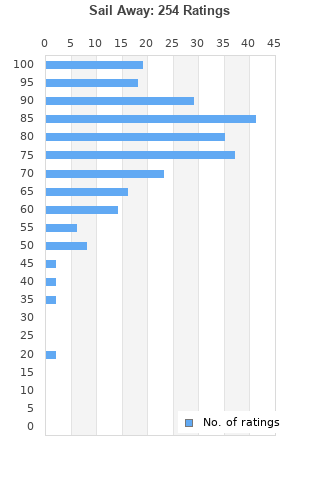 Sail Away: The Songs of Randy Newman by Various Artists !!Disc only no tracking!
Condition: Very Good
Time left: 58m 12s
Ships to: Worldwide
$3.35
Go to store
Product prices and availability are accurate as of the date indicated and are subject to change. Any price and availability information displayed on the linked website at the time of purchase will apply to the purchase of this product.  See full search results on eBay

Sail Away is ranked as the best album by Randy Newman. 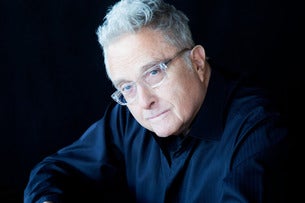 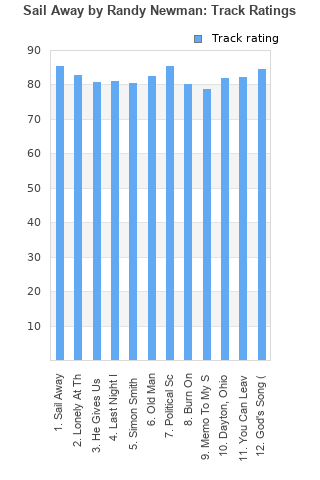 Rating metrics: Outliers can be removed when calculating a mean average to dampen the effects of ratings outside the normal distribution. This figure is provided as the trimmed mean. A high standard deviation can be legitimate, but can sometimes indicate 'gaming' is occurring. Consider a simplified example* of an item receiving ratings of 100, 50, & 0. The mean average rating would be 50. However, ratings of 55, 50 & 45 could also result in the same average. The second average might be more trusted because there is more consensus around a particular rating (a lower deviation).
(*In practice, some albums can have several thousand ratings)
This album is rated in the top 2% of all albums on BestEverAlbums.com. This album has a Bayesian average rating of 78.9/100, a mean average of 78.6/100, and a trimmed mean (excluding outliers) of 79.2/100. The standard deviation for this album is 14.9.

Probably Randy Newman's best album, sail away, is an excellent record from one of America's greatest ever songwriters. Featuring stunning songs from the eternally topical, political science, you can leave your hat on, and, God's song(that's why I love mankind). Brilliant intelligent songs.

Great intro to one of the greatest songwriters of the 20th century.

Randy Newman is in a class all his own. That's not to say he's the BEST of the best, but he is most definitely an icon.

Some guy that sounds like Gruff Rhys but from the far past sings about some weird stuff. He has Willy Wonka complex and probably his attitude too. Maybe. Maybe Not? I'm reviewing 'Sail Away' here, have got to remind myself. Yes, it has an old timey feel. 'Lonely At The Top' self lamenting comes with brass instruments and a tinkering piano. This isn't quite Scott Walker though. This guy is more... pre occupied with the song. I can't see much narration here. Through the sadness of 'Old Man' and the confusion via passion of 'Last Night I Had A Dream' it gives the impression one is reading an audio diary. Except you're listening to the words off the page. I'm confusing am I? Well whatever, nevermind, listen to the album. It won't take long. These songs go in the ear and out sooner than you would think. Not saying it isn't interesting, in fact... it does have some most interesting parts. 'Simon Smith and the Amazing Dancing Bear' takes you to the seaside quicker than the fastest plane. I can see the striped pre first world war swimsuits just be listening... And 'Sail Away' and 'Political Science' certainly have a different sense of humor. Odd odd album. Listened to it 3 times so far and can't quite grasp it. Seems like a grower though.

It was a consistently good seller(Reprise MS 2064) throughout the 70s and 80s and got a lot of airplay in the same period, especially for "Political Science" and "Sail Away". One of my favorite albums and IMO his best, but also check out Randy Newman Live and "I think its going to rain today". I am really glad to see that this album is so popular with the members on this site..albums like this can get lost in the passage of time.

It is lonely at the top, *sighs

Your feedback for Sail Away