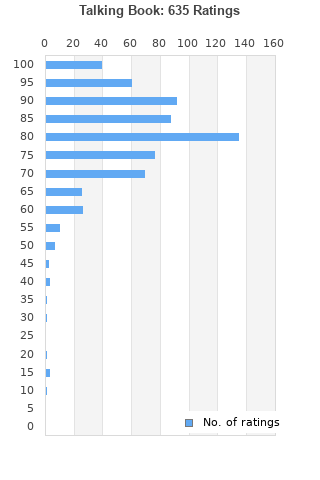 Talking Book is ranked 3rd best out of 37 albums by Stevie Wonder on BestEverAlbums.com.

The best album by Stevie Wonder is Songs In The Key Of Life which is ranked number 91 in the list of all-time albums with a total rank score of 15,771. 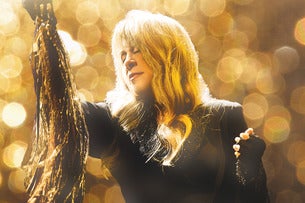 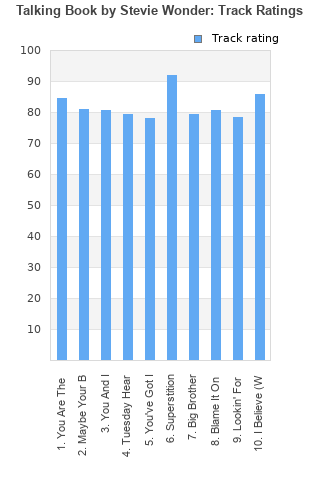 #
Track
Rating/Comments
1.
You Are The Sunshine Of My Life
Rating: 85 (133 votes)Comments:

Rating metrics: Outliers can be removed when calculating a mean average to dampen the effects of ratings outside the normal distribution. This figure is provided as the trimmed mean. A high standard deviation can be legitimate, but can sometimes indicate 'gaming' is occurring. Consider a simplified example* of an item receiving ratings of 100, 50, & 0. The mean average rating would be 50. However, ratings of 55, 50 & 45 could also result in the same average. The second average might be more trusted because there is more consensus around a particular rating (a lower deviation).
(*In practice, some albums can have several thousand ratings)
This album is rated in the top 1% of all albums on BestEverAlbums.com. This album has a Bayesian average rating of 80.8/100, a mean average of 80.1/100, and a trimmed mean (excluding outliers) of 81.0/100. The standard deviation for this album is 13.2.

Superstition is the one of the greatest songs and nothing else here comes close to it. The only other enjoyable track for me is the last track.

Not on the level of Innervisions, but still important.

Another classic from the Musical Genius! Rating (84.00)

Great album. I think I may actually prefer this to SITKOL. Lovin those early seventies keyboard sounds, particularly on Superstition.

Another great Stevie Wonder album. Talking book, is the second in that run of five, maybe six, glorious albums, and is another special record. Some great funky tracks in, superstition, maybe your baby, and, Tuesday heartbreak, as well as beautiful songs in, blame it on the sun, and, I believe. My only complaint though is the lightweight opening track, you are the sunshine of my life. It's extremely slight and has absolutely nothing to do with the rest of the album as far as i'm concerned. Apart from that, it's brilliant.

A tiny bit underrated here. One of my favorite Stevie albums, and it shows him, in vivid detail, taking control of his music and persona. This is certainly a big breakthrough for Stevie although he had been a star for nearly a decade.

Song-wise, does it stand up to Innervisions or SITKOL? Not exactly, still it is a fine soul album with a lot of feeling and great instrumentation. The first great Stevie Wonder album.

Your feedback for Talking Book