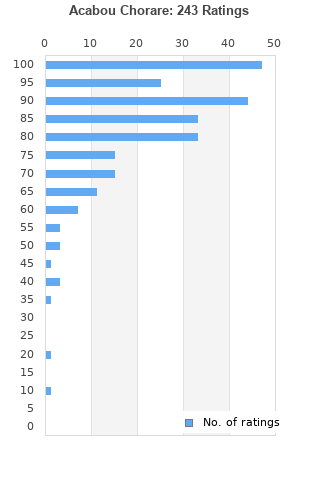 NOVOS BAIANOS-ACABOU CHORARE VINYL LP NEW
Condition: New
Time left: 9d 18h 4m 36s
Ships to: Worldwide
$34.70
Go to store
Product prices and availability are accurate as of the date indicated and are subject to change. Any price and availability information displayed on the linked website at the time of purchase will apply to the purchase of this product.  See full search results on eBay

Acabou Chorare is ranked as the best album by Novos Baianos. 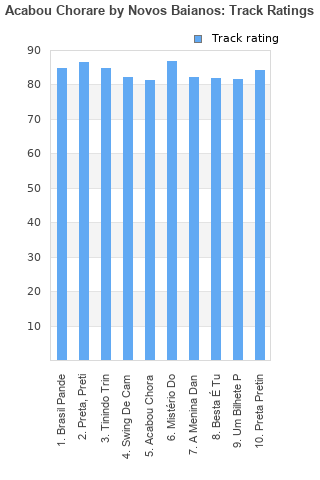 Rating metrics: Outliers can be removed when calculating a mean average to dampen the effects of ratings outside the normal distribution. This figure is provided as the trimmed mean. A high standard deviation can be legitimate, but can sometimes indicate 'gaming' is occurring. Consider a simplified example* of an item receiving ratings of 100, 50, & 0. The mean average rating would be 50. However, ratings of 55, 50 & 45 could also result in the same average. The second average might be more trusted because there is more consensus around a particular rating (a lower deviation).
(*In practice, some albums can have several thousand ratings)
This album is rated in the top 1% of all albums on BestEverAlbums.com. This album has a Bayesian average rating of 83.6/100, a mean average of 83.2/100, and a trimmed mean (excluding outliers) of 84.0/100. The standard deviation for this album is 15.4.

Masterpiece, by one of Brazil's greatest pop groups. A record made only possible because the musicians lived together in a hippie commune, not caring about money, only about music.

this album made my feet start moving without control, awesome songs

Superb record. Wonderful way to get into Brasillian music I think. The girl who sings has an amazing voice and the guitarplaying/rythmsection is out of this world

Brazilian rock, samba and I don't know what else because this album is so rich in every way. All songs are amazing and they have so much culture attached to them.

This is, by far, the greatest album in brasilian music. It deeply captures a mixture of Samba with many other rythims from all over the world. The richness of instruments used is astonishing, as well as the lyrics are. This album comes along with many others that played an important role in the brasilian cultural developmentm, such as Transa and Tropicalia.

Your feedback for Acabou Chorare