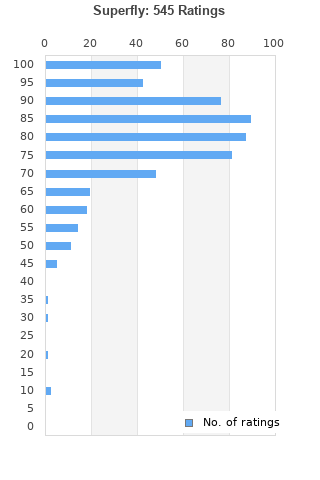 Superfly is ranked as the best album by Curtis Mayfield. 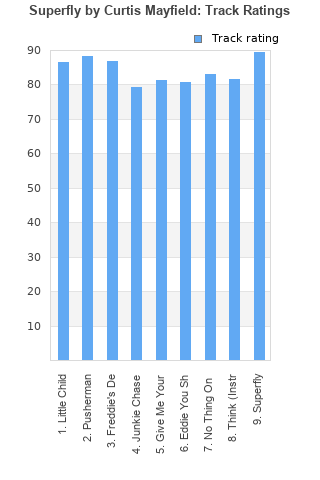 Rating metrics: Outliers can be removed when calculating a mean average to dampen the effects of ratings outside the normal distribution. This figure is provided as the trimmed mean. A high standard deviation can be legitimate, but can sometimes indicate 'gaming' is occurring. Consider a simplified example* of an item receiving ratings of 100, 50, & 0. The mean average rating would be 50. However, ratings of 55, 50 & 45 could also result in the same average. The second average might be more trusted because there is more consensus around a particular rating (a lower deviation).
(*In practice, some albums can have several thousand ratings)
This album is rated in the top 1% of all albums on BestEverAlbums.com. This album has a Bayesian average rating of 80.7/100, a mean average of 80.3/100, and a trimmed mean (excluding outliers) of 80.8/100. The standard deviation for this album is 13.5.

Underrated Record for sure

I've found myself coming back to this album much more often than What's Goin On, the album that inspired it and is often compared to. Both albums are classics tackling similar themes of the plights of black men living in 60's and 70's America, with What's Goin On talking more generally about the government and all Americans and the Vietnam war, while Superfly explores the criminal underbelly of the black ghetto, and how we are all susceptible to corruption and drug abuse no matter where we come from. Superfly is simply a more enjoyable and memorable album with or without the serious subject matter and lyrics. The production is better too with more emphasis on a full band performance, whereas What's Goin On hones in on Gaye's vocal harmonies and the string orchestra. That being said, this album would probably have been very different and not as good if What's Goin On didn't come first.

Man, those horn stabs in the title track are so awesome..

Controversial opinion: This is better than What’s Going On.

The soundtrack to the blaxpotation classic, superfly, it is also a stunning album in it's own right. Fantastic songs, fantastic performances combine to create a wonderful record with tracks such, freddie's dead, pusherman, and the title track. Great stuff, a seventies classic from the great Curtis Mayfield.

one of the greatest funk album ever.

Your feedback for Superfly